Comments on last week’s blog post about pastors using nursing mothers as role models got somewhat sidetracked into a debate on breastfeeding in public worship! In an effort to get the conversation back on track, let’s just edge a few verses further on in 1 Thessalonians 2, and look at the next model of leadership that Paul introduces – The Firm Father.

When Paul used the nursing mother illustration, he probably anticipated the danger of the Thessalonians running to an extreme with it, and becoming too “soft.” Because he immediately introduces the Firm Father model to balance it (1 Thess. 2:11). 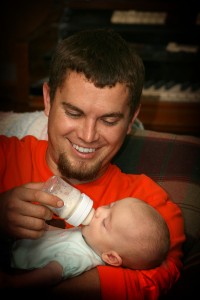 While the Gentle Mother model calls us away from hard-hearted authoritarianism, the Firm Father model calls us away from soft-hearted spoiling of our spiritual children. The leader is called to exercise fatherly authority as well as motherly care. Maybe try to imagine a man feeding a baby with a bottle if you want to capture the balance of this. But let’s look a bit more at the issue of fatherly authority.

The undergirding of authority (v. 10)
The Apostle laid a foundation for his fatherly authority with fatherly presence and fatherly example.

Fatherly presence: There is no such thing as an “absent father.” If a father is always absent from the home, he is not a father. The Apostle can say “we behaved ourselves among you.” As the one whose preaching brought them to life, he could call himself their spiritual father. But he did not just give life and go; he lived among them and with them. They saw him and observed his conduct. He interacted and communicated with them.

Fatherly example: The Apostle asks them to remember not just that he was among them, but how he was among them. He says that his conduct was holy, just, and blameless. He set before them a good and godly example.

The use of authority (v. 11)
The Apostle gave authoritative commands in this letter to the Thessalonians. However, his exercise of authority was much more than the issuing of bare commands. He says: “We exhorted and comforted and charged every one of you, as a father does his own children.”

And notice that Paul gave these exhortations, comforts, and charges to “every one of you.” They were tailored to every single individual in appropriate measure.

Clearly, fatherly authority is a much wider and a much more demanding concept than just commanding people to do something.

The undermining of authority
There are many factors in wider society that undermine the spiritual authority of pastors (the general lack of respect for authority, the media’s caricaturing of preachers, the scandals involving prominent preachers, etc). However, this loss of authority is often made worse by pastors themselves.

Obviously if a pastor engages in sinful conduct, he will lose the respect of his flock. However, the most common way I’ve seen pastors undermine their authority is not so much in sinful conduct, but in foolish and inappropriate conduct – just a simple lack of common sense.

If we act like an academic scholar when we are talking to children, like a gladhanding politician climbing the social ladder when in company, like a radio talk-show host when giving our opinions, etc., then people are not going to respect what we say.

In some ways I wish it wasn’t so, but what we wear also has an impact upon how people view us. Yes, God looks on the heart, but remember people do look on our outward appearance…and draw conclusions about our character. If we dress like teenagers when we are 60, or dress for a funeral when playing games with the children; if we disregard established social conventions; if we play sport or Scrabble as if its the World series or the World Cup; or if, as Robert Anderson says, we “flaunt a macho image, attempting to convey exaggerated images of our manhood,” etc., we will undermine our authority and lose people’s respect.

In The Effective Pastor, Rober Anderson relates how a lady one told him: “It is so nice to have a pastor who you know always will say the appropriate thing. He actually thinks before he speaks. We haven’t always had pastors like that.” Anderson exhorts: “God wants people who have a sense of dignity about them. I do not mean stuffy people. I mean people who know how to conduct themselves properly.”

So concerned was Anderson about this lack of common sense in so many pastors that he brought in someone to teach his class about basic social etiquette….without much success. He says:

Unfortunately it probably is one of the classes that is received the most poorly. I say unfortunately because it is the class that often is needed the most. Not many of our graduates fail in the ministry because they fall prey to doctrinal errors. Numbers, howev­er, have made an improper impact on the ministry simply because they are “klutzes,” are continually making themselves offensive to people—and they will not change. Simple things—such as practicing acceptable table manners, placing a mint in their mouths when deal­ing with people in close proximity, and refraining from picking the nose, ears, or teeth in public—would give those people substantial mileage in being more acceptable to others. If they learned a few social graces in addition and were able to remember to express grati­tude to people for every kind action no matter how small, they would be making major progress toward becoming the type of re­spectable person the Bible demands for the position of pastor. The person who basks in his crudeness and considers it a necessary part of his “macho” image probably should seek another vocation besides the pastorate.

Conclusion
So, it’s neither Gentle Mother nor Firm Father, but both, in appropriate balance for each situation we face. Too much of either – and all of us have a bias to the one or the other – will imbalance us.

But a lack of common sense will destroy us.