It’s the most important Supreme Court case in 30 years. The President’s legacy and electoral future depends on its outcome. And he’s chosen you to represent him before the justices. [Image from Time] 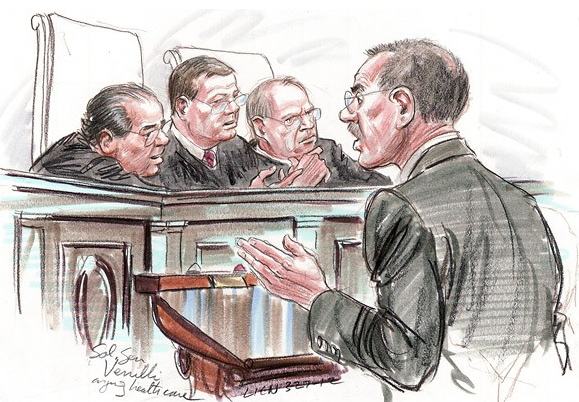 You’ve had 18 months to prepare your opening speech with no limit to the resources or experts at your disposal. The Chief Justice calls you forward. This is the moment that Yale, decades of legal practice, and numerous previous Supreme Court appearances have prepared you for.

You open your mouth and…cough…and splutter…and stumble… and start again…and harrumph…and repeat yourself….and drink a glass of water…and so on. There goes your opening statement!

Solicitor General Donald Verelli’s performance last week has been widely panned, even by Obamacare supporters, with one commentator calling his brain freeze, “one of the most spectacular flameouts ever in the history of the Court.”

You can listen to the audio of his opening statement here, or you can listen to a rather unfair compilation of all Verelli’s fumbles here (please don’t let anyone ever do this to me with one of my sermons).

Anyone who speaks regularly in public can sympathize with Verelli to some extent – because it’s happened to most of us to one degree or another.

Toe-curling
Recently I was watching an online video of a sermon being preached by a popular preacher in a large well-known American church, when this usually polished speaker started falling to pieces. He was stumbling over his words, failing to complete sentences, shuffling his notes all over the pulpit, and speaking at 100 mph.

With hands shaking and face reddening, he then tried a couple of unfunny jokes and quips. With toes curling all over the congregation, including my own, he eventually stopped, took a deep breath, apologized, and said he needed to slow down. He recovered quite well and went on to complete his sermon.

Something similar has happened to me, twice in fact. One time I was due to preach a 35-40 minute sermon, and managed only about 15 mins before I had to stop and sit down. I just couldn’t gather my thoughts enough to go any further. I don’t think I even managed the benediction.

The other time I was publicly reading a chapter from the Bible, when I started to stumble – once, then twice, then three times. The words started going out of focus, sweat started forming on my forehead, and I wondered if I would be able to complete the reading. Thankfully, on that occasion, I found a way to defrost my brain – by pausing, praying, taking a few deep breaths and slowing down.

But there are other possible reasons too, and we should use these (thankfully rare) humiliating occasions to search our consciences and lives:

Let’s just be so thankful that God never deals with us as we deserve. Otherwise, we would probably be left to sink, or freeze, or choke, or all three every time we stood in a pulpit.