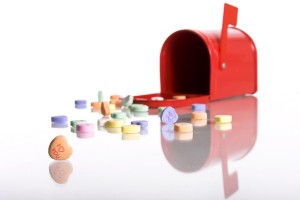 It all started a few weeks ago with a bag of candy left in our mailbox. No name, no note. Hmm!

Then, a few days ago, I noticed colorful packaging sticking out of the mailbox. Moving closer, I discovered two boxes of candy and three packets of Kit-Kats. Again, no name, no note. Hmmmm?

When I brought the booty into the house, the kids got so excited, first at the candy, then at the mystery.

“Where did you get that, Dad?”

“I found it in the mailbox.”

Their cynicism eventually gave way to faith in my innocence, and the investigation moved to, “Well if it wasn’t Dad, who was it?”

Eventually my wife said, “Maybe it’s a Christian who just wants to bless you without you knowing his name.”

“But why would anyone want to do that?” asked my young daughter.

“Well,” said my wife, “Some Christians like to give things to other people without letting everyone know about it.”

“That’s dumb!” was the response.

She said what we think
There you go. Did she not just blurt what so many of us really think? “It’s stupid to do good and tell no one.” What was that about, “Out of the mouths of babes and infants…?”

But doing good without tooting your horn is not dumb. The wisest man that ever lived said it’s actually meant to be the norm: “Take heed that you do not do your charitable deeds before men, to be seen by them. Otherwise you have no reward from your Father in heaven.” (Matt. 6:1).

It’s never been easier to live so much of our lives “before other people…to be seen by them.” Blogs, Facebook, Twitter, etc., allow us to “livestream” every detail of our lives with multiple readers, friends, and followers. In fact “sharing” has become such a “default” for us that, yes, not to share what we’ve done for others does seem “dumb.”

Coram mundus?
We witness, then Tweet about it. We visit a sick senior, then “share a prayer request.” We help a neighbor, then sprint to update our status. We even have to offer live updates when hearing God’s Word! Living coram Deo (before the face of God) is no longer the pinnacle of Christian experience; rather it’s living coram mundus (before the face of the world).

How about we try to strengthen that ancient virtue of doing good without telling the world about it. Try to do one good thing a day and tell no one about. And once we can lift that without screaming, add another weighty but secret good deed, then another, then another, and so on. It’s going to be hard at first. It’s going to feel so alien to do something without others knowing about it. I mean, does a good deed exist if no one knows about it?

Warning and Incentive
But let me offer a warning and an incentive to help us through the pain barrier. The warning first:Let’s remember that every time we do something good and tell everybody, we “will have no reward from [our] Father in heaven.” So we’ve got a choice: a few seconds of sinners’ “likes” and “retweets” on earth, or an eternal reward from God in heaven.

And the incentive? Sometimes it can be very hard to persevere in well-doing when no one else ever sees or knows. But, Jesus assures us, “Your Father who sees in secret will Himself reward you openly” (Matt. 6:4). What an encouraging promise! My Father sees, my Father knows, and my Father will reward me! Divine love instead of Facebook “likes.”

So, the next time you do something commendable and you’re tempted to stretch for your smartphone or computer to “share,” ask yourself: “Am I sacrificing a divine reward from my Father in heaven for the sake of a few seconds of social media crack?”

Mystery solved
And by the way, our young female detectives solved the mystery within 24 hours. Some door-to-door work eventually revealed that every neighbor had been similarly blessed with bags and boxes of anonymous candy. Well, not every neighbor, because they eventually found a house without candy, and a lady neighbor whose boyfriend works for a candy company!

A slightly edited version of this article first appeared in the August issue of Tabletalk. You can read more of the August columns and articles here. Or sign up for a free three month trial (US only).