Walter Isaacson is frustrated. Reviews of his Steve Jobs biography have focused mainly on what he wrote about Jobs’ weirdness: his faults, flaws, rough edges, idiosyncrasies, extreme emotionalism, etc. 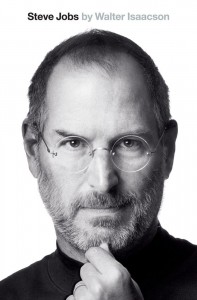 Jobs did not deny his weirdness, and in fact instructed Isaacson to write it into the book. (Maybe he didn’t think Isaacson would take him so literally!)

However, Isaacson wants people to focus on Jobs’ focus; his ability to cut out not only bad things, but even the good things, in order to focus on the great things. Two examples:

When Jobs returned to Apple in 1997, it was producing a dozen versions of the Mac and a random array of numerous peripherals:

After a few weeks of product review sessions, he’d finally had enough. “Stop!” he shouted. “This is crazy.” He grabbed a Magic Marker, padded in his bare feet to a whiteboard, and drew a two-by-two grid. “Here’s what we need,” he declared. Atop the two columns, he wrote “Consumer” and “Pro.” He labeled the two rows “Desktop” and “Portable.” Their job, he told his team members, was to focus on four great products, one for each quadrant. All other products should be canceled. There was a stunned silence. But by getting Apple to focus on making just four computers, he saved the company. “Deciding what not to do is as important as deciding what to do,” he told me.

Jobs also took his top 100 people on retreat every year. In front of his beloved Whiteboard, he would ask, “What are the 10 things we should be doing next?” When the group came up with their top 10, Jobs would slash the bottom seven and announce, “We can only do three.”

Near the end of his life, Jobs met Google CEO Larry Page, and in a rare display of goodwill towards his great rival, he told him to pick five Google products out of Google’s smorgasbord and focus on these alone.

Focus is one of the hardest things to achieve in ministry and in Christian service. Whether we are pastors, elders, deacons, or church members, there is not only so much to do; there is also so much opportunity to do it. There is such huge need around us, and we could (and often do) attempt to supply each and every need to some extent.

We try to do way too much and end up doing nothing really well. We end up like Google instead of Apple.

When Martyn Lloyd Jones heard the much-loved Scottish Pastor Douglas Macmillan preach, he sought him out afterwards and said, “Douglas you are a fine preacher. Keep off the committees!”