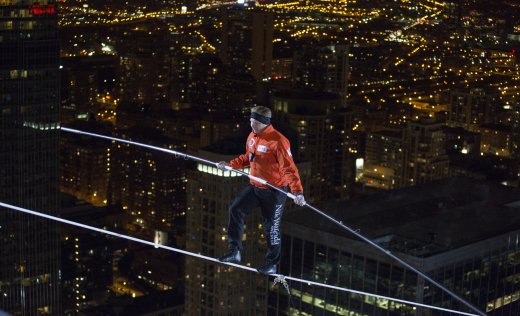 The Skyscraper Live walk was broadcast on The Discovery Channel and follows previous live broadcasts of his tightrope walks across the Grand Canyon and the Niagara Falls. As usual, Wallenda frequently prayed to God and spoke of Christ’s help before, during, and after the walk. Many Christians rejoiced to hear God being praised in such a spectacular way before a watching TV and Internet audience of millions of people.

Which raises huge questions. Can you be a “Christian Tightrope Walker.” Is tightrope-walking a legitimate Christian vocation? Does repeatedly mentioning God sanctify whatever job we do? Or are there certain vocations that Christians should not pursue? If so, are there biblical guidelines for helping us to decide which jobs are legitimate for a Christian? I believe there are four such guidelines, and I’d like to measure Wallenda’s chosen vocation against them.

Can I glorify God in this job? To glorify God is to make Him more famous; it’s to advance His reputation, and to lift up His Name. Conversely, my vocation should not do anything to obscure God’s beauty or reputation.

Although Wallenda mentioned God lots of times, and many Christians said that this was a great witness, I’m sure many non-Christians thought, “What kind of God thinks this is a good idea?” Did their view of God really improve?

Also, is saying God’s name a lot really the same as glorifying God? We can be doing that while all the time actually be trying to glorify ourselves. Interestingly, for all of Wallenda’s praising of God, he did let slip in a previous interview: “I don’t know what people will say about me 100 years from now, but it’s got to be pretty impressive.”

Remember the Devil once took Christ to a high building and tempted him by suggesting that He could publicly prove God’s care for Him by throwing himself off the pinnacle and surviving. Remember Christ’s response?

Can I do good to others in this job? Our vocation should be helpful to our society and contribute something worthwhile to our community. That also means that we should not do anything that might unnecessarily harm others.

Wallenda estimates that these kinds of tightrope walks generate millions in TV and tourism revenue. He also entertained multitudes. So, does money + entertainment = good to others? While there’s nothing wrong with making money and entertaining people, neither of these are enough to qualify a job as “loving our neighbor” by contributing something worthwhile to our community. Money and entertainment may be the by-products of a legitimate Christian vocation, but they hardly constitute one.

Also, what about the power of example? Do we really want to inspire others, perhaps kids, to try tightrope walking in their backyards or across ravines?

Did God give me the talent for this job? God does not call us to a vocation without supplying us with the necessary gifts.

He certainly gave him amazing gifts of courage, emotional control, agility, hand-eye coordination, perseverance, etc. But it was Wallenda who turned these gifts towards tightrope walking. Just because we have the gifts for something does not mean we are obliged to do it. I mean, if God has gifted you (certainly not me) with a beautiful body and a sense of rhythm, does that mean you’re called to be a stripper?

There are many men with similar gifts to Wallenda, who are sacrificially dedicating them to the service of their country in special operations in faraway lands.

Can I obey God in this job? Even if we think that our job glorifies God, helps others, and uses our talents, if it is against God’s Word, then it is illegitimate for a Christian.

“But where in the Bible does it forbid Christian tightrope walkers?” (I can hardly believe I just wrote that sentence!) Well, the sixth commandment, “You shall not kill,” covers far more than murdering. It simply selects the worst manifestation of this category of evil for prohibition. It also includes lesser evils such as rejecting or neglecting lawful means to preserve our lives and the lives of others.*

*See summary expositions of the Bible teaching together with Scripture proof verses in Westminster Shorter Catechism 68 & 69, and Larger Catechism 135 & 136.