Have a guess at these two questions before you read on for the answers:

1. What percentage of Americans share their faith online each week?

2. What percentage of Americans share their faith offline each week? 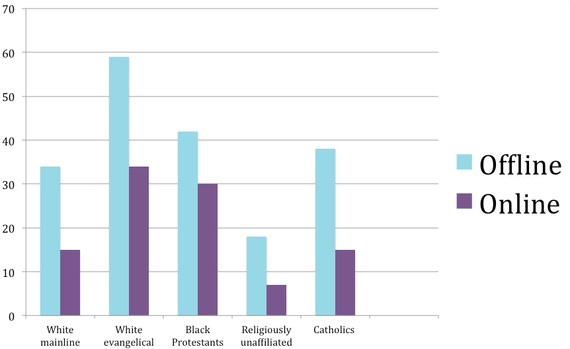 According to the Pew Research Center’s Religion and Electronic Media Report:

1. On average, 20% share their religious faith online each week.

2. On average, 40% share their religious faith offline each week.

Anything surprise you about these figures?

The main thing that surprised me was that twice as many people shared their faith offline than online. As you can see, the figures are higher for evangelicals, with about 60% sharing their faith offline and 34% doing so online. But notice, it’s still about twice the number who share offline compared to online.

I’m pleasantly surprised at that because I thought a lot of Christians had moved their witnessing online where they didn’t need to face real people in real time in the real world. I’m not alone in that perception. Yesterday, I asked some some friends whether they thought Christians witnessed more online than than offline, and they all answered “more online.” It’s good to know we were all wrong and that most Christians are still actively witnessing to Christ in normal everyday life.

A couple of other encouraging findings as reported in The Atlantic:

Emma Green at The Atlantic was quite stunned by that, given that “younger Americans are less religious than older Americans, and they’re also much heavier users of social media.” Good on the seniors who are keeping up with the younger generation!

It still leaves the question as to why a much smaller number share online than offline. Emma Green suggests that people are more comfortable speaking about their faith one-to-one with people they know rather than on social media where so many strangers can “listen in” and comment or criticize.