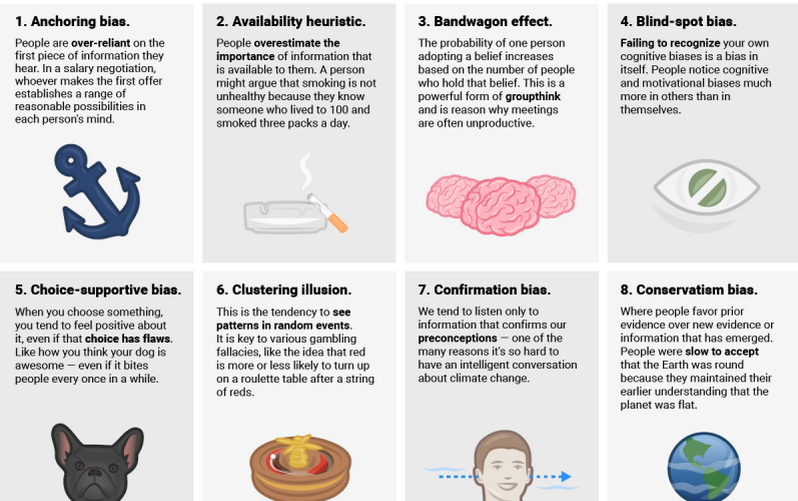 If Infographics do nothing for you, I’ve summarized the information below. Have a look through and ask yourself: How many of these biases can also affect our exegetical decision-making. There were only two I found that I couldn’t match with exegetical biases (#13 & 19). But maybe you can suggest ways in which these might apply as well.

1. Anchoring bias. People are over-reliant on the first piece of information they hear.

2. Availability heuristic. People overestimate the importance of information that is available to them.

3. Bandwagon effect. The probability of one person adopting a belief increases based on the number of people who hold that belief.

4. Blind-spot bias. Failing to recognize your own cognitive biases is a bias in itself.

5. Choice-supportive bias. When you choose something, you tend to feel positive about it, even if that choice has flaws.

6. Clustering illusion. This is the tendency to see patterns in random events.

7. Confirmation bias. We tend to listen only to information that confirms our preconceptions.

8. Conservatism bias. When people favor prior evidence over new evidence or information that has emerged.

9. Information bias. The tendency to seek information when it does not affect action.

10. Ostrich effect. The decision to ignore dangerous or negative information by “burying” one’s head in the sand, like an ostrich.

11. Outcome bias. Judging a decision based on the outcome—rather than how exactly the decision was made in the moment.

12. Overconfidence. Some of us are too confident about our abilities, and this causes us to take greater risks in our daily lives.

13. Placebo effect. When simply believing that something will have a certain effect on you causes it to have that effect.

14. Pro-innovation bias. When a proponent of an innovation tends to overvalue its usefulness and undervalue its limitations.

15. Recency. The tendency to weigh the latest information more heavily than older data.

16. Salience. Our tendency to focus on the most easily recognizable features of a person or concept.

17. Selective perception. Allowing our expectations to influence how we perceive the world.

18. Stereotyping. Expecting a group or person to have certain qualities without having real information about the person.

19. Survivorship bias. An error that comes from focusing only on surviving examples, causing us to misjudge a situation.

20. Zero-risk bias. Sociologists have found that we love certainty—even if it’s counterproductive.