In May 2016, the Library of Congress and the John Kluge Center hosted a symposium on Can Depression be Cured? at which four of the top medical researchers into depression and its treatments presented their latest research findings. A full unedited transcript of the presentations can be found here and the video is here.

The first presentation was given by Dr. Philip Gold. You can read my summary of his stunning research here. The second presentation was by Dr. Carlos Zarate, who runs a large laboratory and research program at the NIH Clinical Center, looking for new and rapid antidepressant treatments. He’s made what many consider to be the most important discovery in the last 25 years in studying depression, and that is the capacity of ketamine to induce remission in treatment-resistant patients with depression in as a little as a 30 minutes and sometime lasting for days.  He’s just published a paper about other compounds that can do this even better that they’re attempting to develop and synthesize to treat depression.  I’ve summarized his address below and I’ll do the same for the remaining address tomorrow or Wednesday, before summing up with a reflection on the research.

Dr. Zarate defines major depression and bipolar disorder as “mood disorders that manifest as problems of mood, behavior, circadian rhythms, and activity levels, with significant impairment in the ability to function.” He said these mood disorders are not now viewed simply as neurochemical disturbances but more as disturbances of brain synapses and circuits, partly due to genetics and environment.

One of Dr. Zarate’s slides displayed the disorders and diseases which caused the most disability and injury. 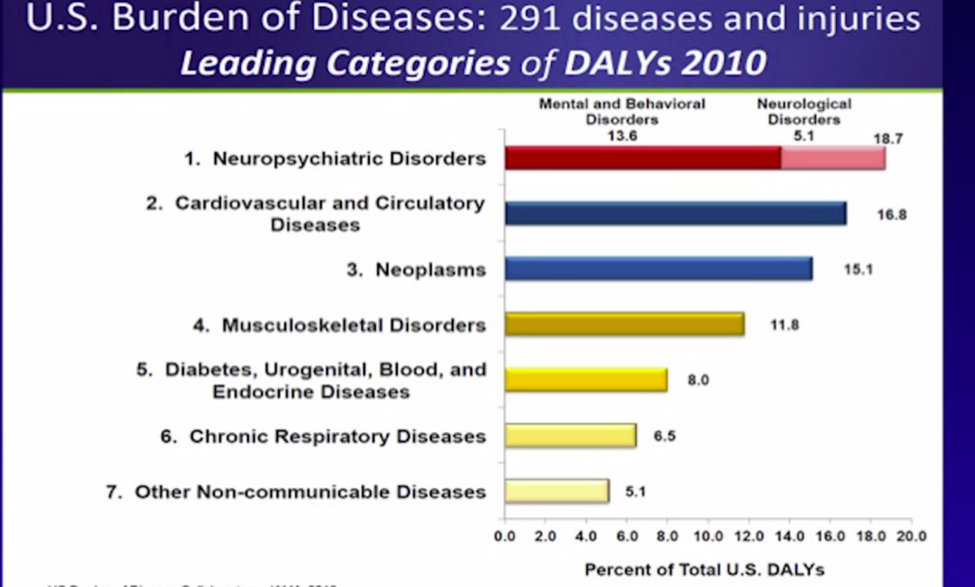 Notice how neuropsychiatric disorders are more disabling than cardiovascular disease, diabetes, strokes, etc. And what makes these disorders even worse is that unlike most of the others, they start early in life and are often life-long.

His next slides demonstrated that although in the past 50 years massive strides have been made in reducing mortality relating to strokes (-25%), AIDS (-50%), heart disease (-65%), and leukemia (-80%), the rates of depression have not decreased and suicide has increased by 24%.

It’s not only death, though. As Dr. Gold’s research has demonstrated, depression is also the cause of many other physical problems and diseases (brain degeneration, osteoporosis, blood clotting, etc.). Indeed, it’s not unusual to live 10 to 20 years less if you have a major mood disorder. On top of all that, there’s the personal disruption to one’s life, personal family, and occupation, as well as the impact on society.

Each episode of depression or bipolar takes a toll on the brain with atrophy (death) and shrinkage of the spines and branches in the neurons. 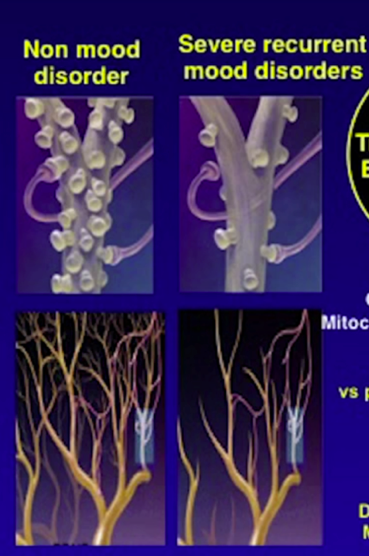 The healthy brain is on the left; it’s dendrites are like a tree in spring with branches and leaves that can absorb the moisture and the rain and propagate the neurochemical signal. The depressed brain on the right has much less structure and circuitry, it’s like a tree in winter. 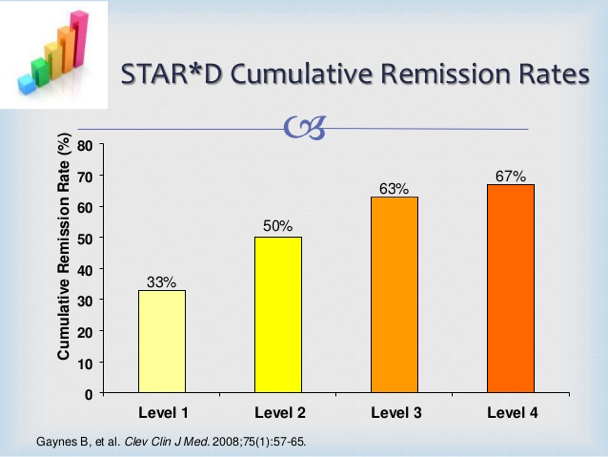 The goal of Dr. Zarate’s program is to develop rapid-acting agents and they are doing so by targeting glutamate receptors in the brain using ketamine (an anaesthetic) and scopolamine (for sea-sickness). Depressed brains seem to have excessive levels of glutamate that cause the “brain trees” to shrink and die. Ketamine reduces these glutamate levels and turns the brain’s winter trees into spring trees. In an early study that used ketamine, depressed patients got substantially better within a few hours.

Dr. Zarate’s research unit then studied patients who had been ill for 24 years, most were disabled, 90% were not able to work.  He explained: “They had failed seven antidepressants, 60% had failed ECT, one of the most effective treatments, 50% of our patients had suicide attempts, some multiple.  And so we really made sure they had failed everything.”

The results? One infusion of ketamine that lasted for 40 minutes led to rapid antidepressant effects within two hours, and lasting about one week. Within two days, about 50-60% of patients were 50% better than before on depression measurement scales.

One of their challenges now is to reduce the side-effects and get rid of the risk of addiction while maintaining the response rate, and progress is being made there.  One medication that Johnson & Johnson have been working on is due to market in 2018.

Dr. Zarate’s summary of his studies: “Ketamine has rapid onset, robust effect, and sustained action. But it has its side effects and one infusion is only lasting about seven days with relapse occurring about day ten. These are the most important areas for further work.”