Living in Grand Rapids, where there’s a lot of Republican money, we’re privileged to be regularly visited by many of the presidential candidates every four years. I’ve managed to get to quite a few of these in person, and my latest was a Donald Trump rally just over a month ago. I like to hear the candidates speak, but I also enjoy the unique atmosphere at American political events, and the opportunity to listen to what people around me are thinking. 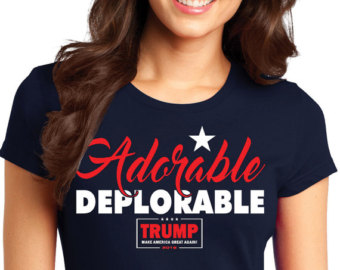 What struck me most at the Trump rally was the number of T-shirts and hats that were being sold and worn that read, “I’m an Adorable Deplorable!” What Hillary intended as an insult to shame, was instead being owned as a badge of honor!

This growing division between the political, economic, and cultural elites, and the rest of us, was described and prophesied by Charles Murray in his 2011 book Coming Apart, where he contrasted two American towns – upper-class Belmont (MA) with working-class Fishtown (PA) – which also told the story of two Americas.

Of course, it’s not just today that “elites” scorn and mock those “beneath” them. In the prophet Micah’s day, about 700 BC, a similar spirit resulted in the rich and powerful oppressing the weak and the defenseless. Jerusalem was the Belmont of his day, and Bethlehem was Fishtown. That’s why he spent many chapters excoriating Jerusalem’s rulers and demanding that they do justly, love mercy, and walk humbly with God (Micah 6:8).

But this “blue-collar prophet” also offered massive encouragement to the deplorables of Bethlehem just six miles away. Though it was despised and belittled by many, God had chosen it to be the place he would enter the world:

But you, Bethlehem Ephrathah,
Though you are little among the thousands of Judah,
Yet out of you shall come forth to Me
The One to be Ruler in Israel,
Whose goings forth are from of old,
From everlasting (Micah 5:2).

Of all the cities God could have chosen for his entrance – religious Jerusalem, powerful Rome, philosophical Athens, literary Alexandria – he chose Bethlehem. He chose to be associated with the forgotten men and women of his day. He chose the deplorables. And this wasn’t just a one-off. This was a revelation of the heart of God that he also exhibited in the kinds of people he came to save (Luke 15:1-2). As the Apostle Paul said:

That’s why we don’t pray for God’s saving love based upon any kind of superiority over others. Rather, we plead that we are deplorable and deserve to be deplored. But that’s also the first step to becoming, in God’s eyes, an adorable deplorable. And that’s a title we wear with honor.