We have hidden biases which damage our witness to Christ. For example:

Who can deny this problem or the damage it does to our witness to Christ? Can we beat bias and improve our witness? Yes, with the help of the Apostle James in James 2:1-4.

1. THE RICH CHRIST SHOWS NO BIAS

Christ was better than all, yet least biased of all.

Well, that’s beautiful, but so what?

2. FAITH IN CHRIST SHOWS NO BIAS

That’s tough but is it such a big deal?

Do you see how bias is a big deal and damages our witness to Christ?

Be unbiased in all areas of life as a powerful witness to Christ’s person and work.

Creator of all people in your image, we confess that we have hidden biases which damage our witness to Christ. We are biased towards the rich, the powerful, and people like us, and we are biased against the poor, the weak, and those different to us.

We praise you for revealing your unbiased heart in Jesus Christ, the friend of sinners, who though he was great and rich, yet showed no sinful bias or favoritism based upon wealth, power, or similarity

Increase our faith in Christ so that we are purged of evil and divisive thoughts, and become more like Christ in our hearts and conduct towards others.

Enable us to be unbiased in all areas of life as a powerful witness to Christ. Amen

Download Infographic here. Listen to this episode on Living the Bible podcast. You can subscribe to the podcast on iTunes and Spotify. Index to Living Faith in Testing Times series. 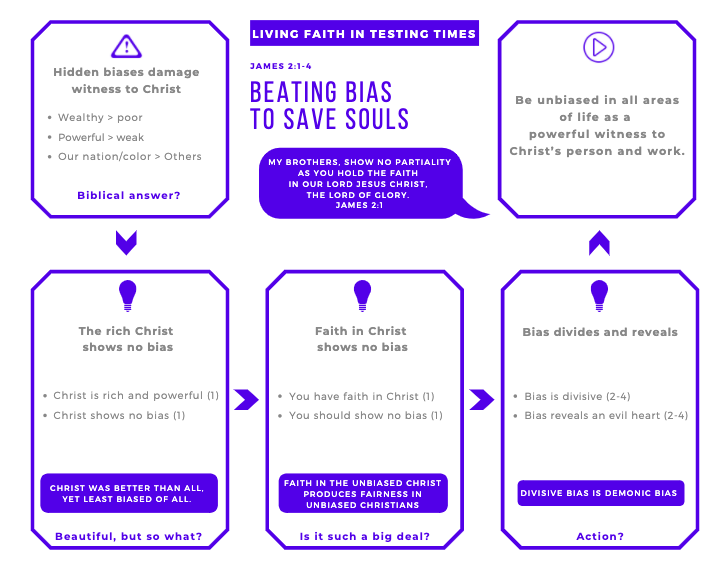