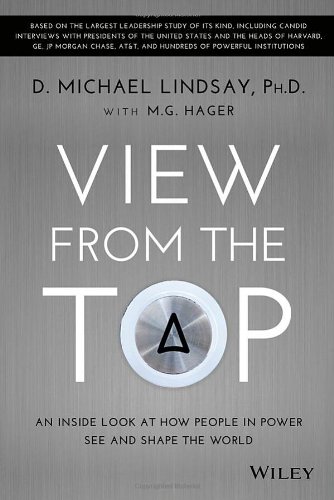 I’ve just finished one of the most enjoyable books on leadership I’ve ever read. It’s called View From The Top: An Inside Look at How People in Power See and Shape the World, and it was written by Gordon College president and sociologist D. Michael Lindsay. It’s the result of a remarkable 10-year study of 550 elite American CEOs, senior government leaders, and nonprofit executives, and provides a wealth of fascinating statistics, a treasure trove of personal anecdotes, and some priceless quotations.

If you want to know how the most influential people in our culture got there, and how they think and operate, you will enjoy and profit from this book.

From my reading of the book, I’d like to share with you the 10 factors I picked out that most of these leaders seem to have in common. But before I list these, perhaps some are asking the question, “Why should a Christian be interested in power and leadership?” Is that not the very antithesis of Christianity. Lindsay, also a Christian, appreciates that concern, and addresses it in the opening pages of the book (and returns to it again at the end):

Some are surprised that I, as a Christian, am interested in power at all. Didn’t Jesus eschew the trappings of power and overturn prevailing notions of greatness and influence? The conviction that Christians should not pursue power is as old as the church itself, one that is still held dearly by many within the Christian family of faith.

I am not persuaded that the countercultural claims of Jesus require Christians to disdain power. I have spent years thinking about this and have come to a firm conviction that much good can come from people devoted to their faith sitting in positions of influence. Indeed, much good can come of the faithful leading major institutions, provided their motives are kept in check by a life of prayer and accountability.

Although not an overtly Christian book, Lindsay regularly returns to the way the research can be read and utilized to encourage Christian leaders. I personally found many applications that could be made in ministry, especially in the areas of mentoring, EQ (relational intelligence), and servant leadership.

But now to the 10 characteristics or features that most of these leaders had in common.

1. A mentor
Having a mentor early in a career is by far the most important contributor to a person’s success. It matters far more than a privileged upbringing, the college attended, extraordinary early life experiences, or what they did did in their teenage years.

2. Two loving parents
The majority of leaders interviewed came from households with two loving parents with the critical factor being the amount of time they spent with their parents.

3. College
Virtually everyone in the study graduated from some college. Only 3% of the leaders did not graduate from college, and among this small group, most attended for some amount of time. Many of the leaders who grew up in poverty had used education to neutralize their disadvantage. Two-thirds of the leaders attended state colleges/universities (i.e. non-Ivy-League).

4. Sports
A surprisingly large proportion of leaders were varsity athletes – 41% in high school and 23 % in college.

5. Global awareness
Most leaders had a wide worldview, often achieved through learning a second language or international travel. 65% traveled abroad for the first time between the ages of 16 and 30.

6. Servant spirit
The most successful leaders did not use their leadership primarily for personal benefit or advancement but for a greater cause.

Those who use their authority to control others or simply for their own gain are not leaders at all, but only power-wielders.

Transformative power (at an institution, in a personal relationship, or in our daily work) almost always comes from great sacrifices. And moral authority—which is the leader’s greatest currency for influence—develops not through usurping power, as some might contend, but through self-giving sacrifice.

7. Generalist
While increasing mastery of their specific field of expertise, the best leaders maintained a generalist orientation. They are “dabblers of sorts, conversant in other kinds of business, knowledgeable about current affairs, and able to connect across divides.”

8. Exposure and Experience
Leadership cannot be taught but it can be caught. The key to developing leaders is to expose students to leadership and to experience it. There is no substitute for trying to do it, and the earlier people try, the more likely they’ll get good at it.

Leading others is significantly easier when followers enjoy being around the leader, and interpersonally gifted people are at a significant advantage in power… The higher the level of the job, the less important technical skills and cognitive abilities were and the more important competence in emotional intelligence became.

One military leader said, “I don’t spend a lot of time in the regret locker.… I’m careful about what I let rent space in my head.” Or as Senator Tom Daschle put it: “I have a philosophy that the windshield is bigger than the rear-view mirror, which means that you always do most of your best effort looking forward rather than looking back.

This is a worthwhile purchase for anyone interested in serving God in any leadership role. Also good for parents in training teenagers to be equipped for such roles and for anyone involved in mentoring young people. Highly recommended.

View From the Top: An Inside Look at How People in Power See and Shape the World by D. Michael Lindsay.