Although so much digital technology revolves around communication, it has had a devastating impact on so many aspects of relationships.

Digital Technology is Killing our Identity

Successful relationships cannot happen unless the people involved have a clear sense of personal identity. But we cultivate and project so many social media personas that we’ve forgotten who we really are. The Internet has changed the way we present ourselves to one another.

Today teenage girls live online, a recent study revealing that “92 percent were going online from a mobile device daily” (10). But this online world isn’t the screen of innocent fun so many parents believe it to be. It’s a hypersexualized world where validation, acceptance, and worth are inexorably connected to sexual appeal and appetite.

The False Reality of Social Media

The “reality” photos and statuses published are just as much a mask as the perfect happy posts we broadcast. Neither show our cyber friends who we really are. We are safe from vulnerability, risk of failure, and have complete control of the image we portray of ourselves.

“Our poll shows that children are aware of many of the risks associated with overuse of technology but they need the adults in their lives to set clear boundaries and role model sensible behaviour.” 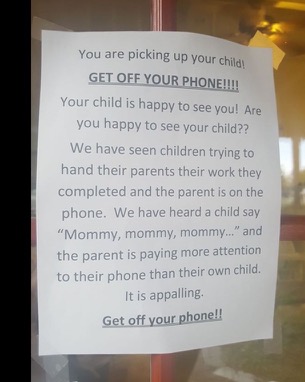 Then read the story behind it.

That Viral Houston Daycare Sign Is Right. Parents, Get Off Your Phones

Digital Technology is Killing our Friendships

A report suggests that more than two hours of social media use a day doubled the chances of a person experiencing social isolation. It claims exposure to idealised representations of other people’s lives may cause feelings of envy.

Smartphones and How They Change Us

While I have undoubtedly gained an immense amount from these (internet relationships), I have frequently found them to be a retreat from the challenge of actual relationships with Christian neighbors with whom I differ.

Has the Smartphone Destroyed a Generation?

Social-networking sites like Facebook promise to connect us to friends. But the portrait of iGen teens emerging from the data is one of a lonely, dislocated generation. Teens who visit social-networking sites every day but see their friends in person less frequently are the most likely to agree with the statements “A lot of times I feel lonely,” “I often feel left out of things,” and “I often wish I had more good friends.” Teens’ feelings of loneliness spiked in 2013 and have remained high since.

Simon Sinek argues that this social media has become a societal addiction and the main reason for poor self-esteem and shallow relationships.

Digital Technology is Killing our Marriages

I Am iPhone: How Our Tech Endangers Our Relationships

“Certain family therapy theorists maintain that when you are working with a couple, there are always three people in the room to consider: the man, the woman, and the relationship itself. The more I have begun to work with couples, the more I’ve realized that this maxim is actually a half-truth. There are three people in the room, but far too often the third ‘person’ is one partner’s smartphone.”

Every case of married infidelity I have seen has involved some form of indiscretion committed on a phone. I have even spent whole (paid!) sessions helping couples learn how to manage their phones.

It’s killing privacy as every moment is now digitized not for family archives but for instant upload to the world for likes and hearts by complete strangers.

We don’t have much of a private life any more as so much lived out in public arena, making mistakes very public too. Also, so much gathering of personal data is going on undetected.

Millennials and Their Phones

The average parent will post almost 1,000 photos of their child online before he or she turns five, according to a 2015 survey of 2,000 parents by The Parent Zone, a U.K.-based site devoted to Internet safety and parenting in the digital age.

Why our son doesn’t have a smartphone

The real reason why our son doesn’t have a phone is because we think his middle-school years will be better spent without one. The answer I’ve given, over and over again, is this: I want you to be free from middle school drama when you’re at home.