Over at the Harvard Business Review, Thomas Delong has written an excellent piece calling upon businesses to Stop Ignoring the Stalwart Worker. I couldn’t believe how apt it was for churches as well. I’ve reproduced the post below in slightly edited form – basically all I’ve done is changed “organization” or “business” to “Churches,” “employees” to “Christians” or “members,” and “CEO” to “pastor.” The changes are in italics. Have a read and see if you recognize yourself or your church.

The diagram below illustrates the labels that churches often use (knowingly or unknowingly) to classify their members. 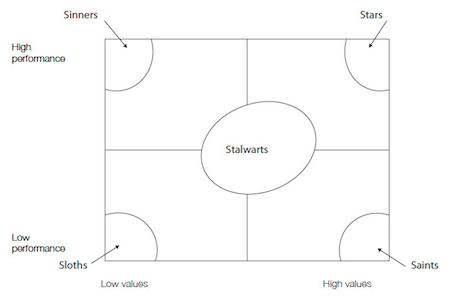 The y-axis focuses on how a member is measured in acts of church service and ministry. The x-axis centers on how the member measures up to moral standards and values.

In each of the four corners, we find the Stars, Sinners, Low Performers, and Saints. For now, I want to bring to your attention those falling in the middle of the diagram — the Stalwarts.

These solid citizens make up the majority of Christians in most churches. The odds are you may find yourself among the Stalwarts at some point in your church life, no matter how high-revving your internal drive is. If so, you probably will find yourself questioning your significance.

That’s because, despite the number of Stalwarts in a church, these good, solid citizens go largely unnoticed. Few pastors think about the motivation, inclusion, and explicit spiritual development of the solid performers. One church leader said, “I thought that it couldn’t be true that so many Christians are systematically ignored through no fault of their own (except for the fact that they may not be politically astute or they don’t draw attention to themselves). But the more I reflected on my own church, the more I realized that I spend all my time worrying about the high performers and assume that everything is OK with everyone else.”

So what exactly is the Stalwart temperament? Perhaps the defining characteristic of Stalwarts is their aversion to calling attention to themselves — even when they need to. They are like the proverbial wheel that never squeaks — and, consequently, gets no grease. The quickest way to identify Stalwarts is to list the people who make the fewest demands on the pastor’s time. Such reserve is utterly alien to most Stars, who make sure that they squeak loudly enough to get the attention they want.

The other signature trait of Stalwarts is their deep loyalty to the church. They are responsible and care deeply about the church’s values, and they generally steer clear of risk. Stalwarts are intrinsically motivated by the service they can render for the good of the church, and they let their own talents and ministries take a backseat to the church’s well-being. They feel that they have accomplished something if the church is running like a well-oiled machine.

If you’re an pastor or leader who manages Stalwarts, it may be time to reexamine the way you perceive your Stalwart members.

(Delong then goes on to look at five myths about stalwarts, and concludes with this paragraph – with my changes again in italics)

Stalwarts bring depth and stability to the churches they serve, slowly but surely improving both the church’s ministries and resilience. They are always there as quiet yet powerful reminders to high performers obsessed with themselves or as examples to low performers terrified of failure. They will never garner the most revenue or publicity, but they are also less likely to embarrass the church or flunk out. They know intuitively how to stay grounded even when their footing may be unsure. And while pastors often take this amazing ability for granted, it brings real value to churches day after day. In times of crisis, Stalwarts can be a church’s saving grace.