OK, I’m really tired of all the Grand Rapids-bashing that keeps rearing it’s ugly head in the Reformed blogosphere. 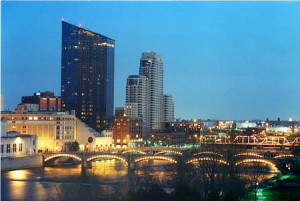 Anyone visiting from Moscow, would think that the city is simply the biggest drag on the Reformed resurgence.

What, you mean that’s just happened?

Yes, the latest salvo of contempt is from Doug Wilson:

And by Calvinist, I do not mean someone who grew up in the environs of Grand Rapids, and whose thought processes are tinctured with some elements of a by-gone Reformed tradition. I mean somebody who actually thinks that God is God, all the way up, all the way down, and all the way across.

I mean, what a crime, to have been raised in or near Grand Rapids, and to actually have some sense of theological connection to God’s work in past ages. You couldn’t possibly be that and ”think that God is God, all the way up, all the way down, and all the way across” could you?

But, thankfully, according to Mr Wilson, deliverance is near. Yes, apparently a striking new “Kuyperian aesthetic” is the answer. “Get out of the way, Historical Theology; make way, Confessional Standards; we’re coming through with our novels, movies, music and paintings. Vive la revolution!”

Now, I admit, Grand Rapids is far from perfect. It’s seen better days – economically and spiritually. The triple viruses of academic liberalism, dead orthodoxy, and cold nominalism have done their deadly work – as they have in every other American city. But much good remains. God’s work goes on – even in Grand Rapids. There are a number of excellent preachers here, and many wonderful Christians. It’s a fantastic place to live, work, and raise a family. I’ve preached in numerous churches here, representing various denominations, and found so much to thank God for.

But even if we’re as bad as we’re made out to be, how should you go about trying to help us? Well, when Jesus saw another “Reformed Jerusalem” in a poor spiritual condition, he didn’t spit out scornful spiritual and cultural superiority, but after forceful critique He wept tears of compassion and pled for her to return to Him.

I see something similar to this concerned pity in the sentiments Tweeted by Shai Linne when he visited Grand Rapids last week:

Shai and I have disagreed in the past, but I certainly agree with the spirit and content of these remarks: first-hand knowledge, recognition of God’s past work, sadness over present decay, appeal to learn lessons, a desire to know more, a concerned warning, and a serious commitment to understand an important and beautiful branch of Christ’s church.

What an example to others who have a genuine desire for the good of the city, the strengthening of the church, and the salvation of lost souls.