Further to my posts in support of the Holy Spirit’s indwelling of Old Testament believers, I’d like to highlight two common mistakes in Bible Interpretation. 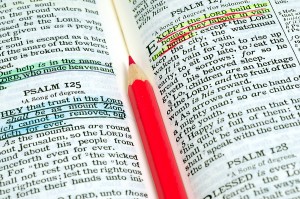 1. Confuse the unfolding of truth with the existence of truth. Just because a truth had not been revealed (or clearly revealed) at some point in biblical history, does not mean that it did not then exist. One of the reasons that Rob Bell’s Love Wins fell into error was by concluding that just because the Old Testament did not reveal much about eternal punishment, that it did not exist.

2. Start with the “hard” texts: One of the principles of hermeneutics is to start with the “easier” or clearer texts, and then go on to interpret the more “obscure” texts in the light of the clear. If we get this back to front, we can get things upside down!

I’m afraid that some who have argued against the Holy Spirit’s indwelling of Old Testament believers may have inadvertently erred in these two areas.

And to start with “hard” texts like John 7:37-39, or at least to let such difficult texts be determining texts, is very likely to mislead us.

Yesterday I tried to present an interpretation of John 7:37-39 that would be consistent with the Bible’s teaching about the necessity and nature of the Spirit’s indwelling of all believers. Today, let me give you a sampling of quotes from commentaries on John 7:37-39 just to demonstrate that such an interpretation of these verses has been common throughout Church history.

Of course, other commentators can be found to argue on the other side, but, generally speaking, they tend to arise from more dispensational writers in the last 120 years or so. Having said that, it’s interesting to note John Piper’s and John Macarthur’s support for the Holy Spirit’s indwelling of Old Testament believers.

Augustine
But without the Spirit we can neither love God nor keep his commandments….We should therefore understand that whoever loves already has the Holy Spirit, and by having him he becomes worthy of having even more of him. And the more he has the Spirit, the more he loves. The disciples already had the Holy Spirit whom the Lord had promised…But they did not yet have him in he way the Lord promised. They had Him in a more limited sense. He was later to be given to them more fully. They had him in a hidden way, but he was yet to be given to them more openly (Tractates on he Gospel of John 74.1-2; cf. 32.6 and On The Trinity 4.20.29-21.30).

John Calvin
And indeed he is speaking comparatively, as when the New Testament is compared to the Old. God promises His Spirit to believers as if He had never given Him to the Fathers. At that time the disciples had undoubtedly already received the firstfruits of the Spirit. For where does faith come from if not from the Spirit? The Evangelist then does not simply deny that the grace of the Spirit was revealed to believers before the death of Christ, but that it was not yet so bright and clear as it would be afterwards.

Martin Luther
He that cometh to Me shall be so furnished with the Holy Ghost, that he shall not be merely quickened and refreshed himself, and delivered from his thirst, but shall be also a strong stone vessel, from which the Holy Ghost in all His gifts shall flow to others, refreshing and comforting and strengthening them, even as he was refreshed by Me. So St Peter, on the day of Pentecost, Acts ii. 41, who, by one sermon, as by a rush of water, delivered three thousand men from the devil’s kingdom, washing them in an hour from sin, death, and Satan.

J C Ryle
Before our Lord died and rose again and ascended, the Holy Ghost was, and hall been from all eternity, one with the Father and the Son, a -distinct Person, of equal power and authority, very and eternal God. But He had not revealed Himself so fully to those whose hearts He dwelt in as He did after the ascension; and He had not come down in person on the Gentile world, or sent forth the Gospel to all mankind with rivers of blessing, as He did when Paul answers” sent forth by the Holy Ghost.” (Acts xiii. 4.) In a word, the d­ispensation of the Spirit had not yet begun.

The expression, “the Holy Ghost was not yet given,” would be more literally rendered, “the Holy Ghost was not.” This cannot of course mean that the Holy Ghost did not exist, and was in no sense present with believers in the Old Testament dispensation. What the expression does mean is this. The Holy Ghost was not yet with men in such fulness of influence on their minds, hearts, and understandings, as the Spirit of adoption and revelation, as He was after our Lord ascended up into heaven. It is clear as daylight, from our Lord’s language about the Spirit, in John xiv. 16, 17, 26; xv. 26; xvi 7-15, that believers were meant to receive a far more full and complete outpouring of the Holy Spirit after His ascension than they had received before. It is a simple matter of fact, indeed that after the ascension the Apostles were quite different men from what they had been before. They both saw, and spoke, and acted like men grown up, while before the ascension they had been like children. It was this increased light and knowledge and decision that made them such a blessing to the world, far more than any miraculous gifts.

Bengel
When therefore we read” the Holy Ghost was not,” we need not be stumbled by the expression. It simply means “He was not fully manifested and poured out on the Church.” Peter, and James, and John, no doubt, had the Spirit now, when our Lord was speaking. But they had Him much more fully after our Lord was glorified.

Hengstenberg
The difference, relative in itself, is uttered in an absolute form: because the advancement in the Spirit’s influence is so important that the earlier does not enter into consideration, and the word holds good, ‘The former shall not be remembered, nor come into mind,’” Isa. .vxl 17. All that was said upon ch. i. 17 is true here likewise. That the Holy Ghost comes so much more abundantly into mention in the New Testament, points us to the fact that a great change in this respect had taken place.

Leon Morris
But there are references to the Spirits activities among people in earlier days. … So it is clear that the Spirit was active in people before this time. When John has said things like “So is everyone who has been born of the Spirit” (John 3:8), he surely cannot mean that the Spirit has not yet been given. He goes on to say that the reason for his statement about the Spirit is that “Jesus was not yet glorified.”
Putting all this together, we can see that what John is saying is something like this. It is true that the Spirit was active in some measure in Old Testament days and in the days when Jesus was on earth. But he did not come in all his fullness until the work of Jesus had been done. In the providence of God the work of the Son preceded that of the Spirit. The era of the Spirit, the time when the full scope of the Spirit’s work would appear, was “not yet.”

John Macarthur
His enhanced role under the New Covenant is more intimate, more personal, but still similar in character to the way we see him functioning in the Old Testament…

We have just seen that He (the Holy Spirit) graciously and sovereignly regenerated individuals during Old Testament times. It logically follows that, in the lives of those in whom He brought new life, the Spirit would have been busily engaged in the significant ministry of preserving and perfecting….A New Testament perspective definitely makes it clear that God, through the Holy Spirit, draws us to Himself and preserves us in that relationship (Rom. 8:29-30, 35-39; Jude 24-25). But we tend to overlook or be unaware of the fact that the Spirit also preserved Old Testament saints in their relationships with God.

See also John Macarthur’s sermon on John 7:37-39 where he interprets the promised Holy Spirit here as power to witness.

And so Jesus says, “You can believe now and have your thirst quenched now, but you shall seven and a half months away, all of a sudden find inside of you are going to be turned loose rivers of living water.” You know, that early church in the book of Acts, they just gushed all over everywhere, didn’t they? Man, they were just drowning people in the living water. But it can’t happen till Jesus goes away. And when He comes, the Holy Spirit, He’ll turn on the rivers. And that’s the story of the church, rivers of blessing….

…Now I want to draw a footnote out of this verse very quickly. Verse 39, there are some people who teach that there are Christians who don’t have the Holy Spirit. That is absolutely anti-Scripture, but it’s very common. Notice verse 39. “But this spoke He of the Spirit whom they that believe on Him should receive.” Who receives the Holy Spirit? They that believe on Christ. Part of them, some of them? All of them! Romans 8:9 if you don’t have that scribbled somewhere in your Bible or in your brain, you’re missing it, it says this, “If any man have not the Spirit of Christ, he is none of His.” Turn that around. If you belong to Him, you have His Spirit.