In A Divine Way to Resist Temptation, Jonah Lehrer tells of how he was raised to observe kosher rules that included a ban on cheeseburgers and pepperoni pizza. Though an impulsive and unrestrained eater in general, he found it easy to observe the pepperoni and cheeseburger ban, even at friends’ parties. 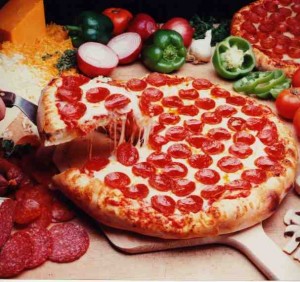 Of course Lehrer’s not alone; lots of usually indisciplined people manage to obey incredibly strict food rules during Ramadan or Lent. As Rabbi David Wolpe told Lehrer: “The world is full of people who are fastidious about Biblical rules but can’t say no to fast food.” The Rabbi’s conclusion? “There’s something about rules from God that make them easier to follow.”

The science of temptation
And the scientists back him up. In a series of experiments Psychologist Kevin Rounding found that, “People are better able to resist their desires when thinking about God.” Even triggering subconscious thoughts of faith increased self-control and the ability to delay self-gratification. In fact, even atheists or agnostics in the studies were influenced in a similar way by subconscious thoughts of God!

Why should this be so? Well, here’s the scientific explanation:

The scientists describe thoughts of God as providing the mind with “important psychological nutrients” that “refuel” our inner resources, much like Gatorade replenishes the body after a long run. The scientists think that faith-based thoughts may increase “self-monitoring” by evoking the idea of an all-knowing, omnipresent God. If God is always watching, we better not misbehave—he knows about the pepperoni.

Three takeaways (pardon the pun!).
First, this is encouraging for Christian parents who have trained up their children in the way they should go, and are not yet seeing any visible fruit for all their prayers and teaching. Be assured, your labor has had an impact, it is impinging on the conscience, and it is affecting choices, even though your son or daughter may not admit it or even be conscious of it.

Second, Proverbs 16:6 is confirmed: “By the fear of the Lord, one departs from evil.” As the Rabbi said, “Thinking about God makes it easier to do the right thing.” When facing temptation, use the divinely provided “Gatorade” of thinking about God to refuel your resistance.

Third, although the Rabbi says, “We need a system of rules to live by,” we actually need much more than that. Yes, let’s use all the external rules and internal helps we can to do the right thing. But we don’t always do it, do we? What then?

Thankfully as the other half of Proverbs 16:6 tells us, God in His love has also provided an atonement to purge away our sins. Christ’s blood is the most powerful sin-resisting fuel in the world.