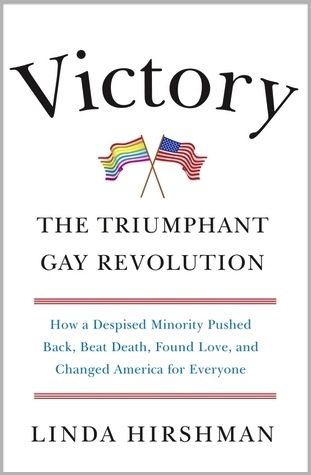 If you just saw the subtitle, “How a Despised Minority Pushed Back, Beat Death, Found Love, and Changed America for Everyone,” you might think that you were about to read a book about Christianity. Sadly, Linda Hirshman’s book Victory is actually describing “The Gay Revolution’s Triumph” over Christianity.

No point in Christians reading about that, right? Well, I certainly wouldn’t recommend it for most Christians; it’s like watching a slow-motion replay of a loved one being murdered. However, as we tend to learn more from our defeats than our successes, it’s worth using this book to conduct a post-mortem on why the Church has lost so many battles in this fight.

Premature hubris?
Maybe, however, Hirshman’s terminology of “Victory” and “Triumph” is premature. Even a gay activist, like Democratic strategist Richard Socarides (who also served as Special Assistant to President Clinton), thinks so. Just before publication, he pled with Hirshman, “But there’s so much that has not been done. People will think you’re saying it’s over and everyone should go home.” With gay marriage still in the “To-do” column, Socarides probably fears public perceptions of hubris that tend to be punished. He may also be wary of history’s numerous examples of mistimed victory laps.

And notice, while accepting that the Church has lost many battles in this arena, I’m not conceding ultimate defeat in this war. There are many worrying signs, and the momentum seems to be against us. However, who knows, perhaps the title and message of this book might be a (metaphorical) “Haman” moment that stirs up many Christians at such a time as this to take a last glorious stand for the biblical definition and institution of marriage. As we examine Hirshman’s analysis of “The Triumphant Gay Revolution” let’s pray that God will use it to teach us and to stir us to action.

Well-defined Strategy
Hirshman’s basic thesis is that while there are some similarities between the black rights and the feminist movements in terms of tactics, the gay rights movement had a far superior strategy, and therefore achieved much more than these other movements.

She argues that while blacks and women sought tolerance and equal rights, they failed to achieve all they could have because they made the great mistake of merely trying to defend their difference. Gay activists’ aims were much higher; not just tolerance, but approval of their difference; not separate but equal, but rather integrated and admired.

Moral certainty
To achieve this strategy, gay leaders had to make a staggering moral claim: “Gay is good.” Not just acceptable, not just OK, but a moral good. Few Christians have grasped this essential element of the gay agenda. Gay men and women are not like most adulterers and fornicators who know their immorality is bad, but still do it anyway. Gays have convinced themselves that they are not only moral, but that their morality is superior to Christian morality, and therefore should replace it.

As Hirshman says: “It is the moral certainty of the gay revolution that explains why, unlike the racial and feminist movements, it has been able to stand up to that powerful counterforce [the morally driven religious right] and, slowly but surely, prevail.”

Identify your enemies
Standing firmly on this “moral foundation,” gay activists identified four major obstacles to achieving their strategic objective: (1) The churches considered them sinful; (2) The state criminalized their sex acts; (3) Doctors – mainly psychologists – thought they were crazy; and (4) The military feared they would be traitors to the nation.

For gays, conformity with mainstream norms was not an option. The accepted versions of sin, crime, sanity, and loyalty were mortal enemies that had to be taken down and replaced.

Select your primary targets
Hirshman provides a stunning wealth of detail about how the gay movement worked to overcome these “four horsemen of the gay apocalypse” – Sinful, Criminal, Crazy, and Subversive.” However, their core moral claim – “Gay is Good” – required a ruthless focus on the two traditional institutions of heterosexual morality – marriage and the military.

Same-sex marriage guru Evan Wolfson saw that marriage was “the central social and legal institution in any society.” Barring gays from marriage focused “on the core of what makes them different: their sexual and emotional relationships. Challenging marriage discrimination would challenge the core of gay exclusion.”

And as the ban on gays in the military was also based upon a moral belief that “gays were more likely to be unreliable and disloyal” that too had to go.

Collective identity
Although the aim was individual rights, “for a despised and marginalized minority, individualism is never the way to equality. Its members must recognize themselves as an oppressed class and act collectively.”

One thing that comes across in the book is the powerful unity of the multiple diverse strands of the gay movement, although Hirshman admits that a lot of that powerful unity was based on the unifying power of sex – “It’s hard to take the sex out of homosexual.”

Refusal to compromise
Despite many political and judicial victories over the years, the gay movement would not stop short of victory over the military and the church. “Don’t ask, don’t tell” (DADT) was the unacceptable sop that President Clinton offered to the many gay supporters he had cultivated by over-promising during the 1992 presidential campaign.

But tolerance of secret conduct was nowhere near enough to achieve the longed-for moral approbation. Repeal of DADT was finally accomplished in 2011, together with the removal of the ban on gays serving in the military.

And we can expect the same no-compromise approach to the one remaining bulwark – the prohibition on Gay Marriage. We need to understand that no amount of “Civil Partnership” compromises will satisfy the demand for moral approval.

Never give up
Many thought that AIDS would be the end of the gay movement. However, in what is the most stunning claim in the whole book, Hirshman says, “AIDS was the making of the gay revolution.” And when you read of how the gay community leveraged this setback to secure massive funding not just for medical treatment, but also for educational and community initiatives (in a way that blacks and women never did), you cannot but agree with the claim.

“Heroism”
Hirshman says that gays benefited from the legal profession’s “nostalgia for the heroic role it played during the racial civil rights movement…For young lawyers aspiring to be the next Thurgood Marshall, the gay revolution was the civil rights movement of their generation.”

In a section that goes a long way to explaining why the legal culture is so anti-Christian, Hirshman points out that law firms have “become among the best places in America for gay and lesbian employees…The legal sector has the largest number of top-scoring companies in HRC’s Corporate Equality Index, an annual measure of how equitably large private businesses in the United States treat their lesbian, gay, bisexual, and transgender employees, consumers, and investors.”

The Last Battle
So, it all looks rather grim for Christians. We are facing opponents with a well-defined strategy, and an energizing moral certainty. Their “kill-list” has three out of four successes and they are pursuing the last, “the most resilient horseman of the gay apocalypse—sin” with a united, uncompromising, never-give-up, laser-like focus on gay marriage. And many lawyers – including our President – are out to make a great name for themselves in this final “Triumph.”

Is there anything we can do? I believe there is. We can repent. Yes, lets begin with ourselves, the Christian church, and our own sin: our apathy, our cowardice, our defeatism, our pragmatism, and our inconsistency. Let’s confess it and seek the empowering pardon that Christ alone can give.

We can also pray. Despite our failings, we can pray for God’s mercy to His church and the nation. We can plead, “For your Name’s sake, for your glory’s sake, intervene for your beautiful and blessed institution of marriage. Lord, this is the first and last bastion of Christian morality. If we lose it, we are unlikely to ever see it restored.”

And we can love. Although the majority of the gay movement hold us in contempt – and make no mistake, they do – let’s not return evil for evil. In our personal relationships with gays, and in our public words, while holding firmly to biblical morality, let’s do all we can to smash the caricatures of Christians as gay-haters. Gays have declared themselves our enemies. As such, they are entitled to our love – especially the love of evangelism.

Lastly, let’s not give up on the legal and political avenues open to us. Let’s prayerfully and practically support courageous Christian individuals and organizations who can speak truth to power.

Who knows, maybe in God’s providence Hirshman might have to write another book before too long: “Debacle: How I helped the gay revolution snatch defeat from the jaws of victory.”

This review was first published at The Gospel Coalition.