Another day. Another multi-billion banking scandal. Another Bank Chairman and Chief Executive do a “Pilate” (or attempt to). Another bunch of junior staff prepare to be sacrificed as scapegoats.

But as financial analysts around the world have observed, although banking executives are now too “clever” to leave a paper trail between themselves and corrupt practices, they know very well how to communicate their instructions by nudges, winks, “pressure from above,” and sales targets that cannot be reached using lawful means.

Corporate Contrast
In stark though pleasant contrast, the Harvard Business Review recently interviewed the global controller of a professional services firm employing 40,000 people. He’d just been assessed by his manager, peers, and direct reports, and reached the elusive 90th percentile mark for honesty and integrity. Given the numerous temptations and possible trade-offs that accompany such a position, HBR asked him his secret:

“It all starts with my boss and his boss,” he replied. “If there is a line for honesty and integrity, they don’t want to be close to it. Instead, they insist there be nothing questionable with any transaction. If there is a liberal interpretation of an accounting principle, they will always take the conservative route. It’s never hard for me to insist on unquestionable honesty, because they set the bar.”

That aligned with HBR’s own statistical “Honesty & Integrity Survey” of 5268 leaders in five different organizations. The graph below shows the highest (red) and lowest-rated (green) organizations, together with the average of all five (blue). 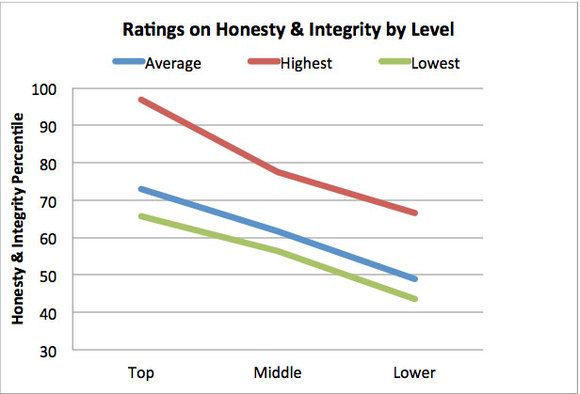 The graph reveals that the honesty and integrity rating decreases at every level as you move down the management chain from Top to Middle to Lower. To put it another way, the top managers in an organization create a ceiling; levels of honesty are set at the top and can only go downhill from there. “Integrity standards really do rise — and fall — from the top.”

Rogue or Representative?
“Rogue Traders” are therefore mythical creatures, generated by “Rogue Management” at “Rogue-infested Companies.” In other words, there’s nothing “rogue” about them; they are representative of company culture from the top down.

But the data also challenges all of us with leadership responsibilities in the home, in the church, in business, or in the civil sphere. Rarely will our children, our congregation, our employees, or our fellow citizens rise above the integrity ceiling that we set.