My son, Allan, has been looking for a car or pickup truck for many months. Since he started learning to drive a few months ago, most of his waking (and probably sleeping) moments have been consumed with getting his own vehicle. Craigslist has been his meat and drink. He probably knows more about cars than I’ve learned in 46 years.

But, there’s a fairly major problem.

Money. Or rather, the lack of it!

He’s been totally stuck. Despite weeks and weeks of seeking, searching, planning, talking, he doesn’t have even a steering wheel to his name.

Until last Monday (yes, Christmas Eve), when we were driving along 3 Mile Rd near our home and God dropped an F250 into our lives. Free! And even added a bow!!

There’s a corner near our home where people put cars for sale from time to time. It was late on Monday afternoon when Allan begged me to stop to look at the black pickup truck that was sitting there with a red bow on it. I said, “Come on, Allan, you’ll never be able to afford that.” But it was Christmas time so I graciously stopped and waited while the “expert” surveyed the vehicle. 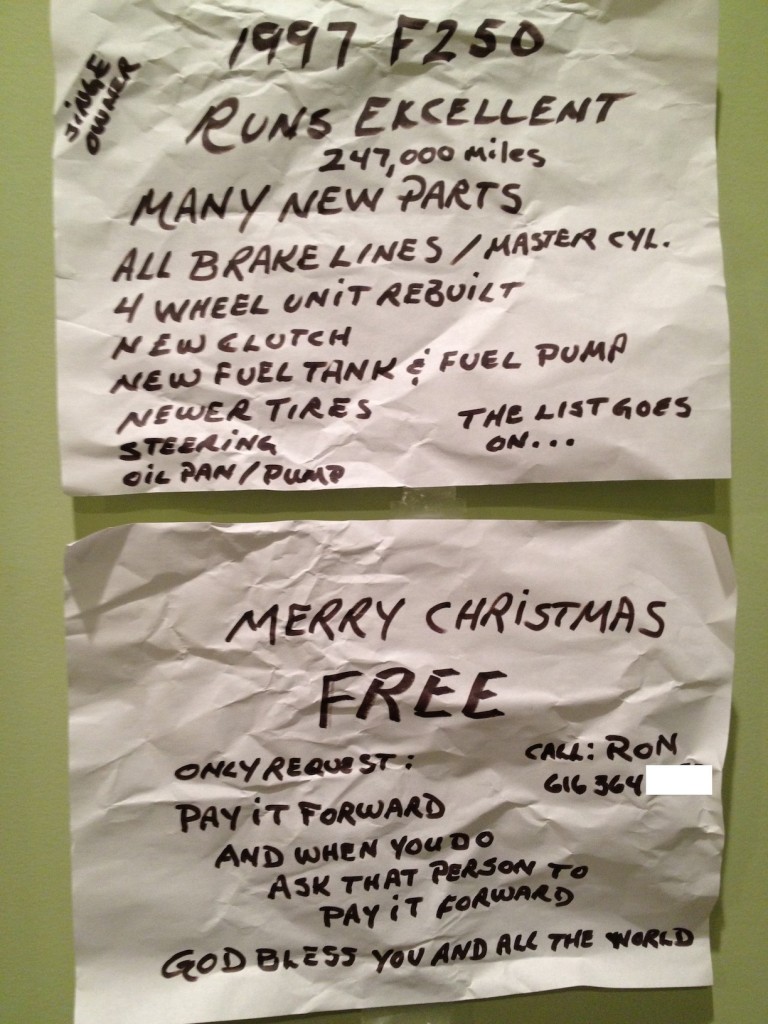 I reluctantly got out of my car to take a pessimistic look, and sure enough, it was “FREE!”

“Dad, can we phone the guy and ask to drive it?”

As Santa was flying overhead at the time, I thought I’d enter into the spirit of the season and entertain his fantasy a bit longer. So we phoned and within minutes we were in the home of a lovely older couple who explained that they had been through really hard times with the recession, but that God had recently blessed them, and they were able to buy a new vehicle. They were going to sell the old F250 on Craigslist for $4000, but decided to simply put it at the end of the road, and then prayed that God would send someone who would really value it. That was 15 minutes ago, and we were the first to call.

“Eh, is it enough to be a preacher of the Gospel?”

One hour later, after sharing God’s gracious dealings with our respective families, we were home with an F250 that God had just dropped from heaven into my son’s lap. Admittedly it’s got @250,000 miles on the clock. But it’s had only one owner, who’s treated it as “my baby” for 15 years and who recently pumped $4000 into it.

Allan said to me a few days ago that he still can’t believe he actually owns it. He posted the story on Facebook and some of his friends thought he was lying! It’s ridiculous, said one. Too good to be true! “Must be a piece of junk!” said another.

No, it’s just the God of all grace, giving my son, and my family, a vivid and unforgettable little snapshot of the Gospel of grace and of our common reactions to it. Most say, “Can’t be free,” or “Can’t be true,” or “Can’t be worth much,” or “That’s ridiculous!”