Pastoring the Pastor: Emails of a Journey through Ministry by Tim Cooper and Kelvin Gardiner 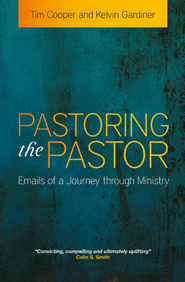 This is a pastoral theology with a difference. Instead of the usual systematic and logical dissection and examination of the pastor’s office, call, duties, relationships, etc., we have an email dialogue between rookie Pastor Dan and his Uncle Eldon, a mature Christian elder in another congregation. There are a few other email exchanges thrown in, revealing a bit more of the story from different angles, but the vast majority is the varied correspondence that passed between Pastor Dan and Uncle Eldon when Dan went to his first congregation…and started sinking.

Although the email correspondence is novel and entertaining, initially I didn’t think I was learning much from it all, and almost gave up. But as the book progressed, I realized more and more that some fairly fundamental lessons were subtly yet powerfully seeping into my life via the narrative. I like system, logic, bullet points, and summaries as much as the next person, and yet I found this “story” approach surprisingly effective in communicating important and memorable lessons for ministry.

Admittedly, some of the correspondence stretched belief and some of it is simply silly (e.g. the congregational barn dance), but some of the most ridiculous parts of the story are, I’m afraid, all too real, as many pastors will testify.

Uncle Eldon is a wise mentor to his novice nephew and dispenses a wide range of priceless encouragement, rebuke, and direction that will be applicable to most pastors, and especially to those just starting out. It’s like an inside look into ministry, a sort of “ministry reality show,” that should help prepare seminary students for the transition from classroom ideals to the treacherous bogs of pastoral ministry. Read it with a notebook on hand and you’ll be surprised at how frequently you’ll jot down valuable counsel.

But it’s not just for pastors, it would also be a helpful read for every Christian, giving you insight to what ministry is like behind-the-scenes and how your actions and words can impact pastors and their families for good and evil.

Above all it’s an encouraging story of transforming grace as we watch a proud and self-sufficient young guy be shaped and and transformed in the ministry for ministry, and in the process watch his congregation be similarly and beautifully metamorphosed by God’s almighty grace.