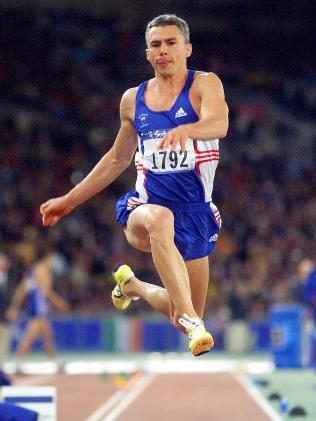 British triple-jumper, Olympic gold-medal winner, and world record holder Jonathan Edwards professed to be a Christian throughout his athletics career, and publicly credited all his success to God. “I can do all things through Christ who strengthens me,” was often on his lips in pre- and post-competition interviews. Christians throughout the UK rejoiced to hear him testify to the power of Christ in his life.

But when he retired from competition in 2003, his faith began to collapse. By 2007, he had renounced Christianity and embraced agnosticism, seemingly without regret. The Times announced his apostasy with the headline: “I’ve never been happier – says the man who won gold but lost God.”

Sports Psychology
In an interview posted on the Richard Dawkins Foundation website he admitted that the biblical verses he used to quote when competing was really just sports psychology dressed in religious clothes; confidence-boosting measures to give him a sense of higher purpose and divine assistance.

“I was always dismissive of sports psychology when I was competing, but I now realise that my belief in God was sports psychology in all but name…Believing in something beyond the self can have a hugely beneficial psychological impact, even if the belief is fallacious,” he says. “It provided a profound sense of reassurance for me because I took the view that the result was in God’s hands. He would love me, win, lose or draw.”

Psychological Deception
I was reminded of this dangerous psychological deception when I was recently re-reading Norman Vincent Peale’s best-selling The Power of Positive Thinking. Although Peale’s book has biblical verses sprinkled throughout, and although it has helped many people, much of what he taught people had no basis or grounding in reality.

For example, he recounts how salespeople who started repeating, “I can do all things through Christ who strengthens me,” increased their sales dramatically. What was not clear, however, was whether many of these people had any sense of who Christ was and is, which is really the key point in that verse.

Mantras and Elephants
It’s knowing who Christ was, what He did on the cross, and what He still does for us to this day that strengthens the believer for every task. For Peale’s salesmen, and Edwards, these kinds of biblical verses seemed to be more like a mantra, a self-assuring, almost self-hypnotizing sense that a higher power was on their side. Their sales and medals might have increased just as much if they had repeated, “I can do all things through the flying pink elephant who strengthens me.” As long as they believed there was a flying pink elephant and it was on their side.

Of course, we rejoice that there are many Christian athletes and salespeople who exercise truth faith in the real Christ as they seek to honor Him in their daily lives and callings. But the next time we’re tempted to embrace and celebrate the latest sports or entertainment celebrity who’s telling everybody “I can do all things through Christ who strengthens me,” let’s just pause and ask: “Do they really know anything about this Christ? Is this more about Christ giving them success than Christ taking away their sins?” And, “Are they believing in Him for gold or for grace?”