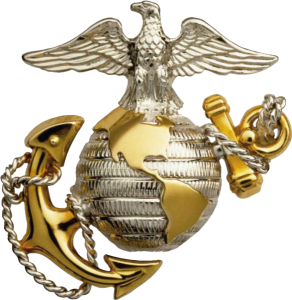 I was recently helped to pray anew for our military heroes by a poem my 15-year-old son, Angus, submitted to a poetry slam competition. He explains: “The point of the poem is to describe the ‘Eagle, Globe and Anchor,’ the golden badge that marine cadets receive when they graduate from boot cap after their grueling 54-hour final test. The marine’s struggles are recorded in the poem but it shows that throughout all the tests, the cadet kept going by keeping the image of that badge in his head.”

I’m afraid I couldn’t write a poem like this even if you gave me a million years. I’m also afraid that I could never be the hero of this poem. But I’m thankful to God that He’s still making such heroes in the USA. Semper Fidelis.

The Badge of Honor

The silver and gold circlet
Shining through the fog
As pinned on that military cloth
Like an ornament of the gods.

He’s been through many toils
Pain, sweat, and tears
Searching for that badge of honor
For many, many years.

Even on the range
That gilded badge was that man’s target
Shooting for it with all his might and skill
Wishing to secure it.

That badge kept him going
Through mental n’ physical pain
Because he knew that if he stayed strong
That famous badge would be his gain.

He spent all his strength
Fighting for the image of that bird
The motto of the freedom of his country
The screech of that eagle he heard.

The sphere was in the front of his mind
He could see the continents outlined in gold
And it seemed like the native land of his birth
Was the brightest on that globe.

That ancient tool of the sea
That kept great ships from dying
Was that anchor that was above his heart
Like a bright emblem flying.

He knew that all these attributes
Were now rolled into one
He was receiving that badge of honor
And would soon be going home.

But he knew that he would always be home
In the land of his birth and pride
He remembered all the souls of those
Who fought for that flag and died.

If anyone looked at that man’s heart
I know what you would see
That great flag, “In God we trust”
And a praying man on his knees.

He stood before his instructors
Who had shaped this young man’s life
As they approached this stalwart soul
For his country he would have died.

The leader that took that emblem
And slipped it from it’s case
Gave the smile that’s talked of legends
And came forth in slow haste.

Honorable and honored
Both courageous and caring
Loving then leaving
Disciplined with determination
Scared yet fearless
Courageous, heroic
Resilient and stoic
Fearless and focused
With integrity and trust
Obedient and ingenious
A team player nonetheless.

The circlet was pulled from its pouch
and pinned to that knight’s lapel
But at the same time that Warrior knew
To his heart it was now stapled.

The golden and the silver combined
Made that man’s heart swell with fervor
For he was the marine cadet
Who had just received the Eagle, Globe, and Anchor.