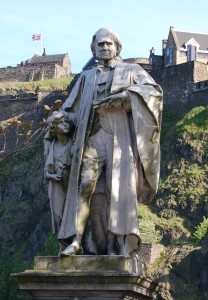 This statue of Dr Thomas Guthrie was unveiled in 1910 and gives him a fitting legacy ‘a friend of the poor and the oppressed.’

The 18th century Scottish pastor, Dr. Thomas Guthrie, was a man of brilliant mind and staunch biblical orthodoxy. But he was also known as the “Apostle of the Ragged Schools” which were instrumental in rescuing thousands of destitute Scottish children from lives of poverty and abuse in the great cities of the nation.

His life and ministry have now been summarized in a new Kindle booklet published by Andrew Murray (no relation!), who has a passion to see the church return to both biblical orthodoxy and orthopraxy.

In the introduction to A Mission Of Mercy: The Life And Legacy Of Dr. Thomas Guthrie, Andrew writes:

“While holding to the doctrine of the Westminster Confession of Faith in the tradition of the Reformers and Covenanters, Guthrie believed in cultivating the ‘outfield’ – the part of society that were ignorant of the gospel and were often trapped in a cycle of poverty. Thomas Guthrie spent most of his time amongst the hopeless and the destitute. It was not some special calling for him, it was the outworking of his beliefs. He was doing what his Savior had done before him – a friend of tax collectors and sinners. Guthrie did not seek to withdraw from the world but sought to win it and transform it by the power of the Gospel.”

“It is my hope that as more of Guthrie’s life and ministry is rediscovered that many will share his vision and zeal. The Church today desperately needs to rediscover its mission to preach that profound yet winsome gospel that Guthrie preached to the whole of society. We need once again to take this good news into the dark and hopeless corners of our communities and become, as Guthrie’s statue in Edinburgh states, ‘a friend of the poor and the oppressed.’”

You can find out more about Thomas Guthrie at ThomasGuthrie.org or at Andrew’s blog, Ragged Theology.