One of the privileges of working at PRTS is the weekly arrival of new books to supplement our library of 70,000+ books. Here are the new picks this week. 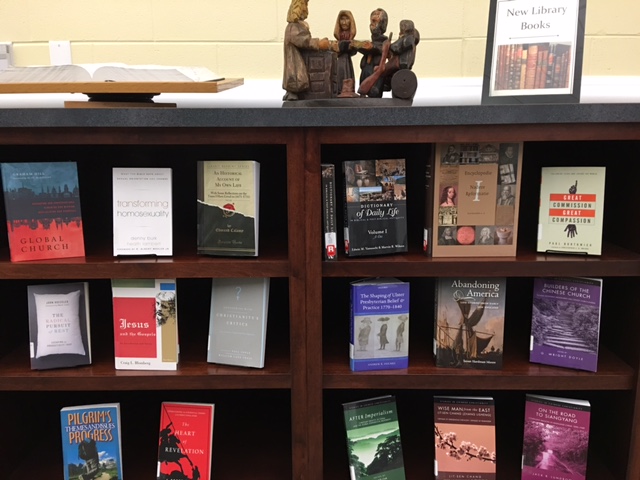 “Christianity seems to be in decline in the West. But many churches in Asia, Africa, Latin America and other parts of the Majority World are growing rapidly. Western Christianity can no longer claim to be the center of the global church. Before long, two-thirds of Christians will live in Asia, Africa and Latin America. What does this mean for global Christian mission?”

Transforming Homosexuality: What the Bible Says about Sexual Orientation and Change by Denny Burk and Heath Lambert

“What does it mean for homosexuality to be transformed? Denny Burk and Heath Lambert challenge misconceptions on all sides as they present biblical answers on sexual orientation and change. Ultimately, hope rests not in heterosexuality, human effort, or willpower, but in Christ.”

“Dr. Calamy has been long distinguished by his Defences of English Protestant Nonconformity, and by his very interesting biographies of Nonconformists.

“Most Bible dictionaries on the market today completely miss a number of cultural and sociological issues of interest to the study of the Scriptures. The Dictionary of Biblical and Post-Biblical Antiquity aims to correct this. Written by a world-class historian and a highly respected biblical scholar, this unique reference work provides background information on the world of the Hebrew Bible and New Testament from 2000 BC to approximately AD 600.”

For those of you up on your Dutch. “The first part of the three-volume encyclopedia about the Reformation… The first part contains hundreds of mini-biographies of the men and women who directly or indirectly have played a role in one of the most exciting trends in the Dutch church history.”

“Go and do. Jesus commands it, and the world needs it. Word and deed go together. One without the other is not enough. We follow Jesus into all the world, and we follow his example in all we do.”

The Radical Pursuit of Rest: Escaping the Productivity Trap by John Koessler

“We live in a culture that values activity, achievement and accomplishment. Whether in our careers, churches, schools or families, busyness is the norm in our lives, and anything less makes us feel unproductive and anxious. We have to work all the harder, then, to pursue true rest in a 24-7 world that is constantly in motion.”

Jesus and the Gospels: An Introduction and Survey by Craig L. Blomberg

“Jesus and the Gospels prepares readers for an intensive study of Matthew, Mark, Luke, John, and the events they narrate. Craig Blomberg considers the historical context of the Gospels and sheds light on the confusing interpretations brought forth over the last two centuries.”

“Contending with Christianity’s Critics is book two in a series on modern Christian apologetics that began with the popular Passionate Conviction. This second installment, featuring writings from eighteen respected apologists such as Gary Habermas and Ben Witherington, addresses challenges from noted New Atheists like Richard Dawkins (The God Delusion) and other contemporary critics of Christianity concerning belief in God, the historical Jesus, and Christianity’s doctrinal coherence.”

The Shaping of Ulster Presbyterian Belief and Practice, 1770-1840 by Andrew R. Holmes

“This is a historical study of the most influential and important Protestant group in Northern Ireland – the Ulster Presbyterians. Andrew R. Holmes argues that to understand Ulster Presbyterianism is to begin to understand the character of Ulster Protestantism more generally and the relationship between religion and identity in present-day Northern Ireland.”

“Abandoning America brings together the biographies of hundreds of people who crossed over to New England in the 1630s but later braved the Atlantic again to return home. Some went back quickly, disenchanted or discouraged. Many invested everything to make New England a success, yet after ten or twenty years resolved to leave America – against a backdrop of civil war and Cromwell’s commonwealth in England, and personal dilemmas about family ties, health and prospects.”

“From 1807, when the first Protestant missionary arrived in China, to the 1920s, when a new phase of growth began, thousands of missionaries and Chinese Christians labored, often under very adverse conditions, to lay the groundwork for a solid, healthy, and self-sustaining Chinese church. Following an Introduction that sets the scene and surveys the entire period, Builders of the Chinese Church contains the stories of nine leading pioneers–seven missionaries and two Chinese…”

After Imperialism: Christian Identity in China and the Global Evangelical Movement by Richard R. Cook

“…in May 2008 over a dozen evangelical scholars (Chinese and Western) from the United States, Hong Kong and Taiwan, came together to address issues of Christian and evangelical identity. The “Inter-Cultural Theological Conversation” was titled “Beyond Our Past: Bible, Cultural Identity, and the Global Evangelical Movement.” This collection of papers from the conference demonstrates the value of the careful balancing of judicious appropriation of the social sciences and thorough biblical inquiry.”

“How should Christianity relate to Chinese culture? That question has engaged the minds of both Chinese and Western Christians for several centuries. Lit-sen Chang (1904-1996) was brought up as a Buddhist and educated in the Confucian classics as well as in modern political philosophy. He later delved deeply into Daoism as well. After World War II, he founded Jiangnan University in order to “exterminate” Christianity and revive Eastern religion. Conversion to Christianity in 1950 radically altered the course of his life… His Critique of Indigenous Theology and Critique of Humanism are published here in English for the first time, and provide excellent examples of his wide learning, insightful analysis, powerful writing, and firm commitment to historic Christianity.”

On the Road to Siangyang: Covenant Mission in Mainland China 1890-1949 by Jack R. Lundbom

“On the Road to Siangyang tells the story of a Swedish immigrant church in America undertaking, soon after its organization, a mission to central China that would last nearly sixty years, from 1890 to 1949, when Christian missionaries had to leave the Chinese Mainland upon the establishment of the People’s Republic.”

“In this volume Barry Horner highlights the major themes running through the allegory and discusses important issues concerning its relevance and how best to make it known in the twenty-first century. He shows how, rightly understood and suitably presented, The Pilgrim’s Progress has a vital message for today’s generation and is a most valuable tool both for evangelism and for encouraging the spiritual growth of believers.”

The Heart of Revelation: Understanding the 10 Essential Themes of the Bible’s Final Book by J. Scott Duvall

“Taking a thematic approach to Revelation, Duvall helps you focus on the vision of hope Revelation provides believers by exploring the biblical themes of God, worship, the people of God, the Holy Spirit, our mission, the Lamb of God, judgment, perseverance, and more, allowing you to understand and apply the message of Revelation–right here, right now.”