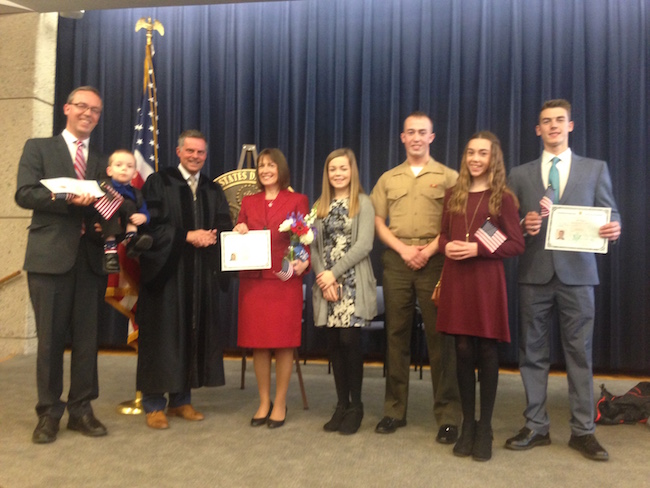 My family and I became American citizens yesterday. The day was a jumble of emotions and thoughts. I’ve tried to disentangle them as much as I can. So here they are in no particular order.

We cannot plan our lives. I had many, many plans growing up. Not one of them involved moving to the USA. Not until Joel Beeke asked me to come to PRTS just over ten years ago did it even cross my mind.

God plans our lives. Although I had never once thought of living in the USA, when the call came from PRTS, there were many factors that indicated this was God’s plan. Initially I said “no” and fought against it for another seven months, but eventually, I could not resist God’s call. Indeed, as soon as I set foot on American soil, even in Newark airport, I had a deep conviction that I would never again return to Scotland to live.

God blesses obedience. One of the factors that initially dissuaded me from coming to the USA was that my wife Shona had been suffering from depression since just before the birth of our fourth child. How could I introduce the upheaval of immigration to her already fragile life? After struggling with this for a long time, I came to believe that if this call was the Lord’s will, then God would look after her. And he has done so abundantly, with Shona’s mental and emotional health improving dramatically since the first few months of arrival. So much so, that she’s now written a book about it.

God multiplies our loaves and fishes. I was terrified about teaching in the Seminary. Although I believed God had called me to do it, I really did look at my gifts and knowledge, as the disciples looked at the loaves and fishes, and asked, “What are these among so many?” But as the Apostle Paul learned when he asked, “Who is sufficient for these things?” I learned daily, and still do ten years later, that “my sufficiency is of God.”

I still have Scottish blood and a Scottish heart. I do not call myself a Scottish-American. I am an American now, and I own that citizenship completely. But I still can’t help crying when I hear the bagpipes. If I see the pictures of Scottish lochs, mountains, and moors, I can smell the scenes and feel the wind on my face. As the Judge said at yesterday’s ceremony, “We do not ask you to deny the emotional attachment to your home nation. We simply ask that you keep it in second place and your commitment to America first.”

I miss my parents. I have four siblings, including a twin brother, and I miss seeing them. But the greatest miss is my aging parents, now in their mid-to-late seventies (Shona’s are in their late eighties). I wish my kids could be with their grandparents like ordinary grandkids, but we can only afford to get over to Scotland every 2-3 years for a week or two. That’s why we’re selling our home and downsizing so that we can get back once a year before the Lord takes our beloved parents into eternity and we have no more opportunity to see them here below.

I’ve changed my family tree. If the Lord spares this world for a few more decades, and if my children are blessed with children, their whole future is so different compared to what it would have been in Scotland. My decision to come here has impacted many future generations of Murrays in ways that I cannot know and may never know on this earth. Who knows if another President may arise from another mother who came from the Isle of Lewis!

Americans are incredibly welcoming people. We’ve been overwhelmed by love since the day we arrived here, not just from the Dutch Reformed community in Grand Rapids (which has been amazing), but wherever we’ve gone. Since we started the citizenship process, we’ve felt even more warmly embraced. Yes, people get upset about illegal immigration, but America is still a country that warmly welcomes legal immigrants. At our ceremony there were maybe 3-4 other white Europeans and the remaining 73 new citizens were a dazzling array of diverse colors and cultures. The Judge encouraged a celebratory atmosphere and it was a beautiful sight and sound to behold!

I love America. I know America has big problems, many of them seemingly insoluble. But it’s still a wonderful place to live and to raise children. I wish my (now) fellow citizens could see that more. Yes, the days of a dominant Christian culture are over, but Christians are still a sizable and influential minority. There are many strong churches with many engaged and zealous young people. There are excellent Christian schools and energetic homeschooling communities. There are multiple opportunities to start businesses and an optimistic culture that encourages entrepreneurship. The military is awesome. The salmon fishing is fantastic. And I’ve even come to love football (the one that they play with their hands), especially college football.

I pray for Scotland. I can assure my Scottish friends that I will never forget you. Every Sunday I pray specifically for my previous congregations and for my old friends in the ministry. How much prayer they need. Ministry is relatively easy here in the USA compared to most congregations in Scotland. Scotland is in desperate need of revival. Please join me in prayer for that.

What I’d change in my new country? Only one thing. The mainstream media. Oh, yes, and more Cadbury’s chocolate.

Thanks for having me!