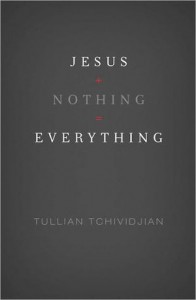 Great quotables (wish I could remember them all).

But also great confusion (and I really wish I didn’t have to say that).

I benefitted from reading Jesus + Nothing = Everything. Tullian Tchividjian writes beautifully about Christ’s sufficiency, and is especially skillful at exposing legalism and explaining justification. Each time I read the book, I was brought to a new love for Christ and a new appropriation of and appreciation for justification.

Tullian also models how to apply the Gospel to very painful life situations, not just to the beginning of spiritual life but to all of life. He’s amazingly honest about his own character flaws and personal failings, but that does allow him to demonstrate the way the Gospel relates to his life and transforms it. I hope I can model that transparency a bit better in my own life and ministry. It probably comes easier to a surfer than a Scot!

I also benefitted from Tullian’s emphasis on the need to found sanctification on justification, the need to base daily growth on the daily preaching of the Gospel to oneself. Too often we separate these, and I’ve been guilty of this at times as well.

So, thank you Tullian. These are not small achievements. You’ve done the church a great service.

And let me say that I also love Tullian’s enthusiasm for Christ. Although I will express some concerns about this book, I do believe that most people who read the book will catch Tullian’s infectious Gospel enthusiasm and be the better for it. I know I did and am.

However, I’m concerned about three confusions at the heart of Tullian’s book.

I’ll deal with the first confusion today and the others in the next couple of days.

I doubt anyone could do a better job of explaining justification and its benefits as Tullian. Also, as I’ve said above, Tullian is very clear on the need to found or base sanctification on justification. Instead of beginning with “I resolve…” we must begin by igniting the rocket fuel of justification.

However, it’s when Tullian lifts off the rocket launcher and into the realm of what sanctification looks like in ordinary everyday life that confusion begins to arise.

Maybe I can sum up my concerns by highlighting a phrase in the Shorter Catechism’s unrivalled definition of sanctification (which I would imagine Tullian’s church also adheres to).

Sanctification is the work of God’s free grace, whereby we are renewed in the whole man, after the image of God, and are enabled more and more to die unto sin, and live unto righteousness.

The work of God’s free grace in us enables us to die to sin and live to righteousness. In contrast to justification, which is accomplished for us with no reference to what we’ve done or not done, sanctification involves our not doing certain things and doing certain things, all by God’s enabling grace.

I used to think that growing as a Christian meant I had to somehow go out and obtain the qualities and attitudes I was lacking. To really mature, I needed to find a way to get more joy, more patience, more faithfulness, and so on. Then I came to the shattering realization that this isn’t what the Bible teaches, and it isn’t the gospel. What the Bible teaches is that we mature as we come to a greater realization of what we already have in Christ. The gospel, in fact, transforms us precisely because it’s not itself a message about our internal transformation but about Christ’s external substitution. We desperately need an advocate, mediator, and friend. But what we need most is a substitute—someone who has done for us and secured for us what we could never do and secure for ourselves. (94, Kindle Edition)

I agree that the Gospel is certainly a message about Christ’s external substitution. But it does not stop there. The Gospel is also a message about internal transformation (a major part of sanctification). Christ saves us from our sins objectively and subjectively, from the penalty of sin and the presence of sin.

The hard work of Christian growth, therefore, is to think less of ourselves and our performance and more of Jesus and his performance for us. Ironically, when we focus mostly on our need to get better, we actually get worse. We become neurotic and self-absorbed. Preoccupation with our effort instead of with God’s effort for us makes us increasingly self-centered and morbidly introspective. (95)

In this next paragraph, the confusing overlapping is even more obvious:

Again, think of it this way: sanctification is the daily hard work of going back to the reality of our justification. It’s going back to the certainty of our objectively secured pardon in Christ and hitting the refresh button a thousand times a day. (95)

If all he is saying is that sanctification begins with our appropriating justification, and is fueled by it, then yes, I agree. But I think he’s going further than that, by suggesting that the totality of sanctification involves going back to our justification. This seems to be confirmed by what he writes in the same context:

Think of what Paul tells us in Philippians 2:12: “Work out your own salvation with fear and trembling.” We’ve got work to do—but what exactly is it? Get better? Try harder? Pray more? Get more involved in church? Read the Bible longer? What precisely is Paul exhorting us to do? He goes on to explain: “For it is God who works in you, both to will and to work for his good pleasure” (v. 13). God works his work in you, which is the work already accomplished by Christ. Our hard work, therefore, means coming to a greater understanding of his work. And so it is that we move further into the gospel, into a deeper, bigger, brighter understanding of all that God has already achieved for us in Christ. (95-96)

Is it correct to say that the “work” that we are called to, and that results from God’s work in us, is simply understanding more, believing more, trusting more? Sure, this is the core of justification, and the foundation and cement of sanctification. But it’s not the whole of sanctification. It’s not every brick of it.

Here are some further quotes that only heightened my anxiety about Tullian’s emphasis:

Growth in the Christian life is the process of receiving Christ’s “It is finished” into new and deeper parts of our being every day, and it happens as the Holy Spirit daily carries God’s good word of justification into our regions of unbelief—what one writer calls our “unevangelized territories.” (78)

In this definition of growth (sanctification), where is the “being enabled to die to sin, and live to righteousness” as described by the Westminster Catechism? Where is the doing and not doing?

I like to remind myself and others that the only thing you contribute to your salvation and to your sanctification is the sin that makes them necessary. (104)

Contribution to salvation = nil! Yes. Contribution to sanctification = nil! No. We are enabled to die to sin and live to righteousness. We are enabled to do and not do. Our (enabled) doing and not doing is part of our sanctification. For example, when Peter protested his love to Jesus, Jesus told him to start feeding his lambs, which involved stopping doing one thing and starting to do another (John 21).

Again, there is a failure to distinguish what “by grace alone” means in each of these doctrinal categories. In justification, by grace alone means we do nothing. In sanctification, it means we are enabled to do/not do many things.

As G. C. Berkouwer wisely remarked, “The heart of sanctification is the life which feeds on justification.” (190)

Sanctification consists of the daily realization that in Christ we have died and in Christ we have been raised. Life change happens as the heart daily grasps death and life. Daily reformation is the fruit of daily resurrection. (117)

This quote begins to highlight why my concerns are not merely theoretical. Tomorrow I hope to show that this view of sanctification results in an unusual mix of internal activity and external passivity. There’s huge internal activity involving more understanding and more faith, but virtually nothing about dying to sin and living to righteousness outwardly. Tullian seems to assume that if you put the fuel of justification in the tank, outward sanctification takes place automatically (e.g. “Life change happens as the heart daily grasps death and life.”) However, as I hope to show tomorrow, you still have to put your foot on the pedal, your hand on the wheel, and begin to expend some energy to make any spiritual progress.

There are other places in the book where Tullian is much clearer and much more consistent with historic Christian definitions of sanctification. Chapter 10 is probably the best chapter in this regard. But I don’t think you can make up for confusion in such important matters in the majority of the book, by returning to a more accurate explanation in one chapter of it, and in a few other places scattered here and there.

I fear Tullian’s commendable desire to re-connect sanctification with justification (a very necessary message) has led him to conflate them, and identify the one with the other. But maybe he’s also fallen into this mistake by making his own experience a rule for others, something we’ll consider tomorrow.

All page numbers are from the Kindle Edition of the book.

Part 2: The danger of making our experience the norm for others
Part 3: Does Jesus respond to our obedience with love