Yesterday I dipped my toe into American politics and survived; it will probably be a while until I venture forth in that direction again. But I mentioned how many political biographies I’d read over the years – maybe a bit of an odd reading diet for a pastor and professor – and I’d like to explain why.

Partly it’s because they are so entertaining. And by that I don’t mean “funny,” but rather “enthralling…captivating…etc.” I love observing the rise and fall of powerful men and women; I admire their God-given gifts of organization, management, leadership, oratory, etc.; I tremble at their fatal flaws and mis-steps; I soar with awe at their courage and I sag with despair at their cowardice. Power is such a fascinating roller-coaster, isn’t it. As such these political bios have been a stimulating and enjoyable way to spend some of my evening hours.

I also love watching how God’s providence interacts with human affairs. Of course, rarely do the biographers or autobiographers attribute events to God, at least not the successes; but it’s so intriguing to read the same events through Bible-tinged glasses and see God’s interventions in powerful people’s lives. As Nebuchadnezzar found out, there is a King of kings and Lord of lords.

These books also give such insights into the dark depths of human nature. You see what people are prepared to do, say, and be in order to gain power, keep power, and deny power to others. You see what people do with power when they have it. I’m sure we hardly know even the half of it, but that half is bad enough. And an increasingly painful trend is the self-justification that rears its ugly head in many of the biographies. I like to see politicians, generals, etc, admit mistakes and take responsibility. But that rarely happens today. Instead it’s just page after page of self-vindication. Maybe it’s the political climate, but very few have the courage now to say, “I was wrong. I made a bad decision there.”

The loner President
Let me give you a recent example of this: two recent stories played the same note, though one played it with the left hand and the other with the right. Obama the loner president appeared in The Washington Post, a newspaper usually sympathetic to the President, and Aimless Obama walks alone was in the New York Post, not one of the President’s fans. 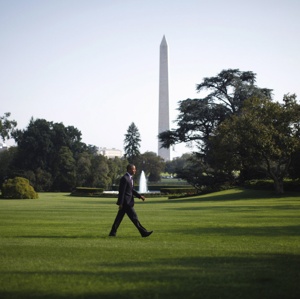 Both articles had the same theme: in the face of multiple difficult problems, President Obama withdraws from people and limits contact to a few close confidantes, spending the evenings in his office with books and his internet browser. Here’s how the (friendly) Washington Post begins its story:

Beyond the economy, the wars and the polls, President Obama has a problem: people.

This president endures with little joy the small talk and back-slapping of retail politics, rarely spends more than a few minutes on a rope line, refuses to coddle even his biggest donors. His relationship with Democrats on Capitol Hill is frosty, to be generous. Personal lobbying on behalf of legislation? He prefers to leave that to Vice President Biden, an old-school political charmer.

Obama’s circle of close advisers is as small as the cluster of personal friends that predates his presidency. There is no entourage, no Friends of Barack to explain or defend a politician who has confounded many supporters with his cool personality and penchant for compromise.

Obama is, in short, a political loner who prefers policy over the people who make politics in this country work.

The reports are not good, disturbing even. I have heard basically the same story four times in the last 10 days, and the people doing the talking are in New York and Washington and are spread across the political spectrum.

The gist is this: President Obama has become a lone wolf, a stranger to his own government. He talks mostly, and sometimes only, to friend and adviser Valerie Jarrett and to David Axelrod, his political strategist.

Everybody else, including members of his Cabinet, have little face time with him except for brief meetings that serve as photo ops.

The president’s workdays are said to end early, often at 4 p.m. He usually has dinner in the family residence with his wife and daughters, then retreats to a private office. One person said he takes a stack of briefing books. Others aren’t sure what he does.

If the reports are accurate, and I believe they are, they paint a picture of an isolated man trapped in a collapsing presidency.

The Washington Post identifies this “isolationism” as a character trait, whereas the New York Post sees it more as a reaction to the difficulties of his presidency. It’s probably a bit of both. And although there’s probably a bit of exaggeration going on here, it does seem to fit the generally depressed picture of the President these days.

Lessons?
So where’s the pastoral takeaway?

Well, many pastors, by nature and temperament, prefer theology to people, preaching to pastoring, quiet to socializing, books to the BBQ. Such men must daily “deny themselves” and fight against their nature in order to visit, mix, and connect with people. But they also have to be extra careful when difficulties come into their ministries that they don’t default to withdrawal, isolation, and the select company of those who agree with them.

Whatever people think of Bill Clinton’s policies and personality, he certainly had “people skills” (yes, probably too many of them); he knew how to connect policies to people. Last month he was advising Democrats on how to overcome the Republican’s anti-government message. “If you’re going to fight that,” he told a room full of engrossed former advisers, “your counter has to be rooted in the lives of other people.”

That’s where our theology must be rooted as well – in the lives of our people. Theology in the abstract, disconnected from real life, will accomplish nothing and actually put distance not only between us and our people, but also between God and our people.

Our pastorates must be rooted in lives of our people also, and never more so than when difficulties and opposition arise. So, if you’re retreating to the study and the books because of an onslaught of pastoral problems, give yourself a good kick out of the door. (Or ask your wife to do it). Mix with your friends, spend time with your elders, visit the flock, and invite your enemies to the BBQ.