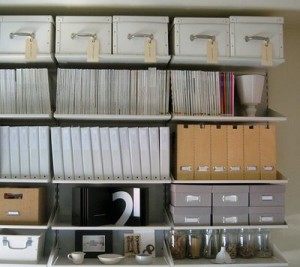 It’s a terrible word isn’t it.

Don’t dare mention it in the hearing of creative people.

In his research for Making Ideas Happen, Scott Belsky found not only that most creatives described themselves as messy or chaotic, but that the vast majority wore it as a badge of honor!

I once knew a Pastor like that, a “Conquistador of Chaos” as Julie Morgenstern would describe him. Procedures, systems, routines, filing, diaries and To-do lists were traitors and enemies to be kept out of that study at all costs!

While bureaucracy has sometimes suffocated good ideas, Belsky argues that “your approach to productivity largely determines your creative output. The way you organize projects, prioritize, and manage your energy is arguably more important than the quality of the ideas you wish to pursue.” [14]

Belsky uses a mathematical equation to prove his point:

But imagine if you were able to combine left-brain with right-brain to produce this sum:

Well you don’t need to imagine, because there is such a company and it’s name is….Apple!

Surprising in a way isn’t it. Apple is usually associated with stunning innovation and beautiful design. But Apple is also consistently in the top 5 of Fortune 500 companies for such mundane matters as managing the supply chain.

Structure and organization are at least as important as idea generation if we are at all interested in execution and production. And we shouldn’t be surprised at this; after all, THE Creator is a God of order, not confusion (1 Cor. 14:33,40).

Belsky pleads with creatives (and that includes preachers, teachers, entrepreneurs, students, homemakers, etc.,) to have “a relentless bias toward action” in order to push any idea forward to execution, and quotes a number of successful creatives to back him up:

The truth is, creativity isn’t about wild talent as much as it’s about productivity (Robert Sutton, Professor at Stanford School of Engineering).

Seth Godin once said that the vast majority of the products or organizations he had built failed. “But,” he explained, “the reason that I’ve managed a modicum of success is because I just keep shipping.”

Jesse Rothstein, super-salesman at Proctor & Gamble and founder of Coach for America, has a secret: “Perseverance and a simple conviction that he adheres to with an almost religious fervor: he follows up like crazy.”

“I’m starting to believe that life is just about following up,” he told Belsky.

Rothstein’s brilliance lies with the fact that he always identifies the necessary actions for each project and then takes them (and enforces them) relentlessly. He always follows up until every action is done. [86].