I visited Scotland last summer, including a wonderful 5-day trip to Stornoway, Isle of Lewis, where my wife’s parents live and where I used to pastor.

To reach my international return flight from London to Chicago, I had to take two internal UK flights with two different airlines, one from Stornoway to Inverness with Flybe, and one from Inverness to London with Easyjet. 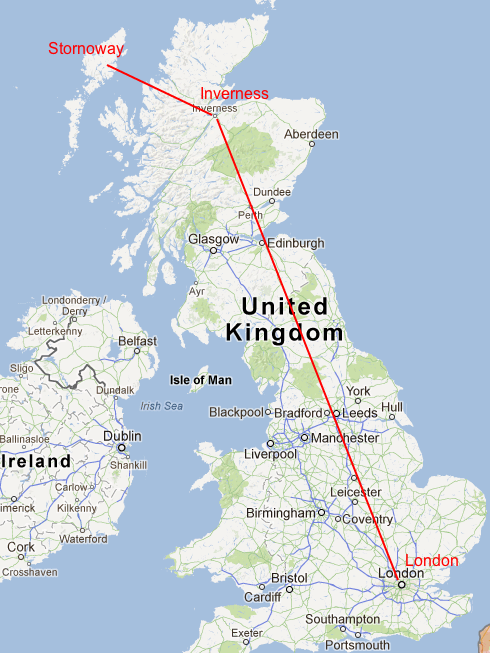 Knowing the unpredictability of Scottish weather, even in July, I decided to pay for delay/cancellation/missed flight insurance on both these flights, at about $10-$15 per flight.

And sure enough, when the morning of July 6 rolled round, the fog rolled in, delaying my Stornoway-Inverness flight, and causing me to miss my Inverness-London flight.

Not a big problem, though. The flight was only delayed two hours, I was able to purchase a ticket for a later Inverness-London flight, and my international flight was the next day. I’ll just claim the insurance and get the $300 back in a month or so.

Terms and conditions
Three months, multiple forms, long delays, and many phone calls later, I still have no insurance refund, and won’t be getting one either.

I first tried re-claiming from Flybe, whose Stornoway-Inverness plane was originally delayed. Eventually, they told me that their insurance only covered flights going outside the UK, not domestic flights. “Read the terms and conditions,” I was told.

OK, I’ll try Easyjet, the Inverness-London flight I missed. They refused payment too, because I was not a UK resident! “Read the terms and conditions, etc.”

Both companies allowed me to purchase insurance knowing that their policies could not cover the flights I was booking. Flybe knew I was booking a domestic flight. Easyjet knew that I was not a UK resident. Both took my money. Both refused to payout. Both had small print excuses. Does anyone ever read these terms and conditions?

False pretenses
It’s not the money. OK, it’s partly the money – I  could do quite a lot with $300. It’s mainly the principle, the injustice of taking money on false pretenses, and then using small print that they know no one reads to cover their tracks. Why advertise it as delay/cancellation/missed flight insurance when it isn’t, and why take money from people you know can’t re-claim it even if they do miss their flight?

American tourists be warned! Read the small print – although you probably need an attorney to understand it – and don’t trust the capital letter promises.

True and trustworthy promises
One upside of this little episode is that although my bank balance has decreased, as has my trust in human organizations, my valuation of the Gospel and trust in God has increased. As I was preparing a sermon last week on John 10:10 and Jesus’ gift of abundant life, I couldn’t help but rejoice that His CAPITAL LETTER promises are true and there’s no small print.

What a joy to be able to proclaim the good news of free salvation for sinners through Jesus Christ! No small print, no terms and conditions, no attorney required. Believe in the Lord Jesus Christ and you shall be saved. Full stop.