Ever heard of “compassion fatigue”? Neither had I…until very recently. But now that I know about it, I have definitely experienced it. Probably you have too, especially if you’re involved in ministry or caregiving. 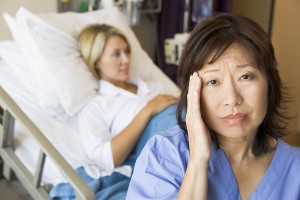 Compassion fatigue is a condition characterized by a gradual lessening of compassion over time. Common among caregivers, it was first diagnosed in nurses in the 1950s.

Sufferers can exhibit several symptoms including hopelessness, a decrease in experiences of pleasure, constant stress and anxiety, and a pervasive negative attitude. Detrimental effects include decrease in productivity, inability to focus, and development of new feelings of incompetency and self doubt.

Media Saturation
Some argue that the media shares a large part of the blame for the current prevalence of compassion fatigue “by saturating newspapers and news shows with tragic stories and images of suffering, causing the public to become cynical, or become resistant to helping people who are suffering.” In extreme cases it can lead to such a hardening of the heart that carers turn into abusers.

Contrary to what you might think, it’s the most sensitive and sympathetic who are most likely to suffer from this. Charles R. Figley, co-author of Compassion Fatigue:

And yes, there’s a website. At the Compassion Fatigue Awareness Project, you can even take a Compassion Fatigue Self-Test! Apart from education and raising self-awareness, the path to wellness includes the old faithfuls of exercise, eating healthy foods, drinking plenty water, just say no, being proactive instead of reactive, friends, etc.

Christ’s Compassion
But I’d like to add another remedy, and that’s the consideration and experience of Christ’s compassion. “He took our infirmities and bare our sicknesses” (Matt. 8:17). That does not mean that He suffered all the weaknesses and sicknesses that we endure. It does mean that he felt them as if He endured them. That’s what compassion is, isn’t it. It’s an ability to enter into another person’s life and to so imagine the agony of their suffering that we feel the pain ourselves.

Jesus was able to enter every painful situation – leprosy, blindness, deafness, bereavement, etc – and feel it as if he was the leper, as if he he was blind, deaf, bereaved, etc. In fact with his perfect human sensitivity, he was able to feel the pain of these conditions even more excruciatingly than the actual sufferers themselves!

No one was surrounded by so many sick and sorrowful people as Jesus, as hundreds and thousands and tens of thousands were brought to him for healing. Yet he never once suffered from compassion fatigue.

Did it exhaust Him? Of course it did. He was so shattered at times that He needed to withdraw and recharge his batteries. However, though tired out by compassion, He never tired of compassion. Though it exhausted Him, He never stopped experiencing it. If anyone ever felt the cost of caring, He did; yet He continued to pay the price even when the objects of His compassion returned the favor with cruel ingratitude.

Pastors, caregivers, sensitive souls, bring your compassion fatigue to the ever- and always-compassionate Christ. Envelop yourselves in His refreshing care, recharge your batteries by connecting to His tender love, and resensitize your hearts with His kind grace.